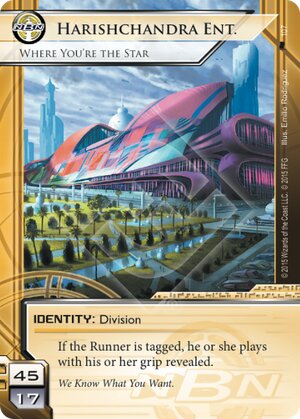 Harishchandra Ent.: Where You're the Star

If the Runner is tagged, he or she plays with his or her grip revealed.

We Know What You Want.
Illustrated by Emilio Rodriguez
Decklists with this card

Most initial takes on a Harishchandra build seem to focused on Butchershop-type decks: NBN kill decks that tag primarily through Midseason Replacements and spend the majority of their influence on Weyland meat damage in the form of Scorched Earth and Traffic Accident. Still, that's hardly the only thing the ID can do as it has numerous strong in-faction synergies, both with tagging effects & cards that manipulate/take advantage of the runner's grip. Some notably strong synergies include:

Out of faction, aside from Weyland meat damage, Snare! is notable for its ability to land a surprise tag. Even if the runner clears tags immediately, the corp gets a peak at their grip. It's worth noting that tag avoidance like New Angeles City Hall & Forger would not trigger the corp's ability.

While a lot of people will stick with the other strong yellow IDs, Harishchandra is primed to be relevant for a long time. Most of the cards listed above are good in their own right & adding even minimal value on top of that makes the identity compelling for tag-based strategies. The 17 influence is almost as gratuitous as it is in Near-Earth Hub.

I think top tiers of competition may not experiment with this ID too much, because at a certain level knowledge of a player's hand adds very little value. Top players know deck archetypes well, are adept at reading board states, & accurately interpret their opponent's moves such that explicitly seeing the opponent's hand isn't hugely beneficial. It doesn't help that, in top cuts or late in tournaments, decklists are mostly known so the Harishchandra ability won't be unveiling surprise splashes like Account Siphon in Shaper or Indexing in Criminal. That's just my guess, could be wrong, it's obviously too early to tell.

(Fear the Masses era)
phette23 2237
Been playing around with this a bit now. phette23 is probably right that it won't see a lot of tournament play, but I'd say that part of the problem is that while Harishchandra's ability is quite useful - very, very useful, in fact - it requires a tagstorm, and it provides neither the tagging nor the mechanical tag-punishment. This means that you have to include a whole lot in order to make it work, and building the right deck to take advantage of everything starts to feel very difficult indeed. — Navelgazer 6 Aug 2016
The big problem I see for Harischandra, is that Salems Hospitality and Targeted Marketing are the only cards that really let you gain off seeing the runner's grip, and neither of those really help get you closer to your win condition, and other IDs such as SYNC, NEH, and Sol all are more helpful for decks that aim to land tags and hit the runner with big tag punishment. — Quarg 21 Aug 2017