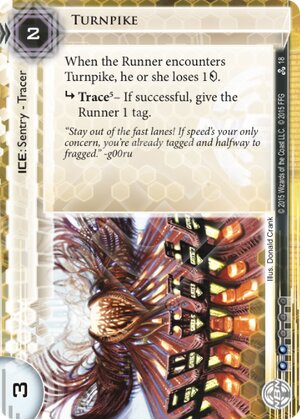 When the Runner encounters this ice, they lose 1credit.

subroutine Trace [5]–. If successful, give the Runner 1 tag.

"Stay out of the fast lanes! If speed's your only concern, you're already tagged and halfway to fragged." -g00ru
Illustrated by Donald Crank
Decklists with this card

This is probably my third favorite piece of tagging ICE, after Data Raven and Gutenberg.

Suppose they break Turnpike with a Mimic. Then for the rez cost of 2, you've created an obstruction that costs them 2 to get through every time. And if they're using a less efficient icebreaker (GS Shrike M2, for example) then it's going to cost them more to break this than it cost you to rez it, something very few pieces of ICE can claim.

On the other hand, what if they can't break it, or choose to let it fire? They still lose a credit, and are then facing down a 5 strength trace. Sunny with Rabbit Hole might be able to get through that for cheap, but for most other runners 5 strength is enough that they will just take the tag and later spend +2 to clear it, plus if you happen to be using SYNC side A. That's a good deal for a 2 piece of ICE.

Both of these areas are true about Data Raven and Gutenberg as well, though--expensive to break with icebreakers, and expensive to clear the tags if you don't. But both cards have a weakness, which is that as soon as the runner says "Fuck it" and stops clearing tags, they provide zero obstacle. I've seen games where a runner Medium digs an R&D covered by two Gutenbergs, because when you have 18 tags whats a couple more?

Turnpike, though, is always going to cost them 1 to go through, even when tags don't matter. It's not much, but it might slow them down long enough for you to pull out that Closed Accounts or The All-Seeing I or the classic Scorched Earth to win the game.

I think that Turnpike is an automatic include in every SYNC deck. You will get your money's worth out of this card, I guarantee it, especially if you are running Improved Tracers or Surveillance Sweep.