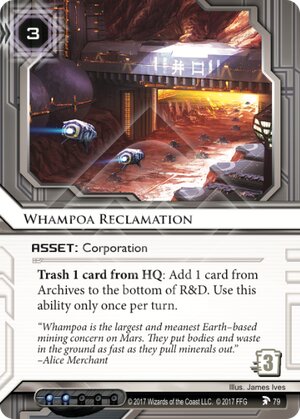 Trash 1 card from HQ: Add 1 card from Archives to the bottom of R&D. Use this ability only once per turn.

"Whampoa is the largest and meanest Earth-based mining concern on Mars. They put bodies and waste in the ground as fast as they pull minerals out." - Alice Merchant
Illustrated by James Ives
Decklists with this card

An obvious Jackson Howard replacement, it has a few things over Jackson while suffering a few disadvantages

Useful at any time: Jackson Howard doesn't work during a Legwork run. Whampoa Reclamation can quickly trash your agenda to prevent it from being stolen.

Adds to the bottom of R&D- Useful for burying agendas rather than shuffling, where they may be put right on top

Doesn't RFG itself, can be Friends in High Places'd

Discards that Vanilla you don't need to recycle that trashed BOOM!

Get one less use, assuming you do it on your turn and the runners. Only filters 2 cards.

An extra influence for everyone

The extra influence is probably the most painful thing, but I feel the corps will adapt. I don't think this is the "true" Jackson replacement, I think Preemptive Action edges this out, but it can be a nice support for other "Half Jacksons" we've been getting, like Alexa Belsky, Special Report, etc.

(Blood and Water era)
Handsome Jack 1591
Good review! — CactusJack 25 Jun 2017
"Cons vs. Jackson Get one less use, assuming you do it on your turn and the runners. Only filters 2 cards." Every turn. I played this at my games night this week and recycled many cards. Including the other copy of Whampoa that was trashed. They just kept coming back. — lunchmoney 1 Jul 2017
The disadvantage was assuming it was always trashed, obviously that will not always be the case, but without protection, it is the most realistic. — Handsome Jack 3 Jul 2017
With Industrial Genomics ID Whampoa Reclamation trash cost is subjected to additional cost of my face-down archive? — sengir80 19 Jul 2017