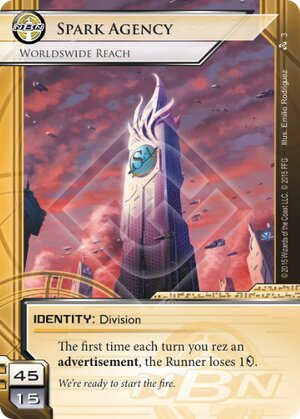 The first time each turn you rez an advertisement, the Runner loses 1credit.

We're ready to start the fire.
Illustrated by Emilio Rodriguez
Decklists with this card

This ID explores some interesting new space in the meta. There are several IDs that give the player 1c per turn, ETF, Kate, Ken, two of which are extremely popular, and the third is waiting for its time. Gaining 1c per turn is a huge boost as anyone who has swapped ETF for any other HB ID can tell you. Many of these decks will design their play around firing their ability once every turn for that credit, which will often add up to ~8-12c by the end of the game.

Spark goes the other way. This ID takes money away from your opponent each time you rez a particular subtype that applies to economy assets, ICE, and an upgrade. All of these cards provide an economic advantage to the corp, while hurting the runner economy.

The corp typically chooses to rez assets during the runner's turn after the 4th click. This is the standard window to rez some econ assets such as Adonis Campaign or PAD Campaign , but these can also be rezzed between clicks. This gives the corp an opportunity to rob a credit from the runner before they can play a card, but at the cost of some hidden information. Interrupting the runner from playing Sure Gamble after they clicked for a 5th credit will be the standard example, but breaking up a Test Run install or other predicted action will also be possible. This will force the runner to slow down their tempo to hold an extra credit to anticipate when the taxman will hit them.

The 1c tax during a run can also make a difference. Saving an asset from being trashed before the runner accesses is helpful, but using the rez to block an NAPD Contract steal is a game-changer. Making Pop-up Window, a long-time nuisance into a 2c tax when rezzed for free while turning on a corp income source will make many a runner scowl in disapproval.

The obvious combo with this ID is Rebranding Team, which now makes any asset rez into a 1c tax on the runner. More targets to trigger the ability can push this ability's power into top-tier territory, and opens the potential (however unlikely) for a corp-headlock on an unfortunate runner. Some other combinations to consider are Reversed Accounts to keep the runner poor, Ad Blitz to recur your trashed/expired tax/econ elements (or potentially any asset when paired with Rebranding Team, it looks clear for now, but we may need a ruling here). Finally, I personally like Midway Station Grid in this ID with multi-subbed ICE to tax the runner a little more on every run, further pressuring their economy, and on occasion even shutting down a run.

In conclusion, I think this is a pretty strong ID, possibly good enough for some players to build it into tier 1 decks. I don't think it is strong for Fast Advance, it's ability doesn't do anything to accelerate cards through the corp's hand or advance cards any more efficiently. I think this ID will find itself a home in a heavily-taxing corp glacier. The asset-protection upgrade, Red Herrings works surprisingly well in a deck that focuses on depleting runner credits.

(Data and Destiny era)
bubbathegoat 597
Concerning Test Runs: This applies even more so to SMCs when you rezz an ice, since there is no immediate reation for the runner between rezzing the ice and the (asset/upgrade) advertisement. However I think Rebranding Team does not really fit in. While it is strongest inside Spark there are really not that many assets aside from Jackson Howard that Spark wants to play that are not already assets. — Capstone 5 Nov 2015
3

Versatility is the golden egg among the gaggle of IDs, and credits are at the forefront. Money talks, and the economy race is paramount in Netrunner, so we have an ID that supports the corp by setting back their opponent. At the start of the Flashpoint cycle we're starting to see a shift towards NBN trace-centric punishment in forms of Hard-Hitting News and Hatchet Job; threats towards Economy, Resources, Programs, Agendas and Life are all viable if you cannot out-money the corp and a tag is landed. I've found this identity to be one of the most interesting and versatile identities in NBN's pool, outside of the ever classic NEH.

Aside from the aforementioned constant credit drop to set back the Runner's Sure Gambles, look at how the identity can leverage a credit swing on your behalf. Product Placement is one of my favourite NBN cards, and can act as a fantastic bluff upgrade to a potential naked Astro, so long as the Runner is willing to further push money into your pockets for the risk. In a bid to ensure a Midseason Replacements landed I installed an Explode-a-palooza behind a Special Offer with a Product Placement, which was rezed on my turn. The Runner runs it, steals the agendas, and hits all ICE and Upgrades on the way - ending with a -1 and -2 on their part to take 2 points and give me +11. The Midseasons lands comfortably and now it's race between Psychographics / Project Beale or Scorched Earth / BOOM!.

Consulting Visit plays a great role to get the necessary operations into play when the time is right. Fairchild 1.0 applies a nice tax on face-checking Runners, with the constant threat of the necessity to spend credits that are being depleted. Poor Runners will also have a hard time getting through Tollbooth and Little Engine if they cannot climb the hill to begin with. Slow score behind high-strength ICE while draining the Runner's credit pool, Leverage the economic race to your advantage to go full on tag storm, leading up to a flatline or a 1-Beale victory, this ID gives you those options.

(Blood Money era)
Mechanoise 1582
Spark only triggers on the first ad you rez each turn...so if you rez Offer AND Product Placement in the same turn, they should only lose 1 cred. — LordRandomness 11 Aug 2016
Correct, but I said that the Product Placement was Rezed on my turn, and naturally the Offer would be Rezed on theirs. Probably my awkward way of wording it. — Mechanoise 14 Aug 2016