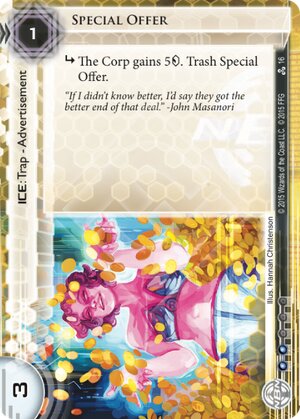 "If I didn't know better, I'd say they got the better end of that deal." -John Masanori
Illustrated by Hannah Christenson
Decklists with this card

This is a great card in Spark Agency: Worldswide Reach decks to generate credit advantage for the corp. If it's the first advertisement rezzed that turn, the credit swing increases to 5 credits.

This advantage in turn can be used to bring trashed advertisements (including itself!) back with Ad Blitz, to fuel an Ash 2X3ZB9CY in a scoring server, or to rez expensive pieces of ice.

A good placement of the ice is right in front of a piece of ice such as Tollbooth. This may allow a sudden rez of a piece of ice that the runner was not expecting (since runners may face-check servers based on the corp's credit count).

For cautious runners meanwhile, the mere placement of the ice may be sufficient to deter them from making some early game runs.

It will be interesting to see the devious ways players devise over time to make best use of this trap ice!

(Data and Destiny era)
Hayati 49
I put chum in front of this in a recent game, that was fun! — DapperCapitalist 8 Apr 2017