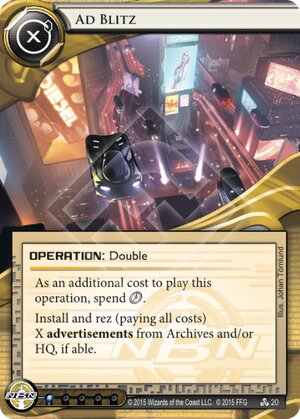 Install and rez (paying all costs) X advertisements from Archives and/or HQ, if able.

Illustrated by Johan Törnlund
Decklists with this card

This is a great card for Spark Agency: Worldswide Reach decks! Play out your advertisements as they come, and over time, they may get trashed. Then, use this card to play them all back in at the same time!

The effect on the runner is significant, as they have to spend all those clicks and credits removing them again- and perhaps they suspect you have another copy of this card waiting in the wings! For that reason, I observe that the runner does not generally have the appetite to trash everything a second time round. This then gives you a monster economy, allowing you to get your ice installed and lock them out of your servers.

(Data and Destiny era)
Hayati 49
Let's not forget the fact that you have to pay the rez cost for all those advertisements and the cost to play AD Blitz. So i don't expect to see many Massreinstallments. This card will probably recurse only one or two advertisements per use. — haywire 16 Nov 2015
Actually, in my experience it's about 6-7 ads. Mostly cheap ones like Launch and PAD Campaign, Product Placement, Special Offer or Pop-up Window, but from time to time an Adonis as well, especially if you play Breaker Bay first click, followed by Ad Blitz. I see this card much like Trope - you use it to be able to burn through your stuff again and keep up pressure, because you know your deck is going to need something to stay ahead in the long run. I wouldn't include this if I made a deck that aims for short games. This is a card that says "This game is far from over, buddy!". After testing it, I'd say, this is the card that makes slow Spark glaciers work. — Krams 16 Nov 2015
I agree with Krams, play this in a slow grinding deck and you can bring back quite a few cards in the later stages. The effect on the runner is devastating! — Hayati 18 Nov 2015