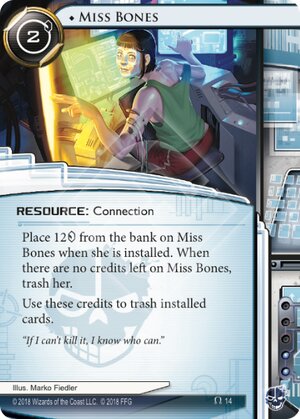 Place 12credit from the bank on Miss Bones when she is installed. When there are no credits left on Miss Bones, trash her.

Use these credits to trash installed cards.

"If I can't kill it, I know who can."
Illustrated by Marko Fiedler
Decklists with this card

Although this card will obviously be compared to Scrubber, both due its similar effect and identical cost, it is actually a very different beast.

Scrubber, with its 2 recurring credits, is slow and methodical. It takes a minimum of 3 turns for you to make a profit off installing it. You get to snipe an asset here, a Rashida there, or make an expensive but important trash (like Crisium Grid or Lady Liberty) a bit less painful. If you find Scrubber early, it will serve you well for the entire game and unless your opponent only has operations, it will never be a dead card.

Miss Bones on the other hand is more about instant gratification. She gives you 12 immediate credits, no questions asked, go nuts. While you can save them up over the course of a game, often you may want to spend an entire turn completely dismanting the corp's shit, especially against ID's like CTM or IG. Twelve credits is A LOT, and will trash a good deal of corp installs.

But that is about all this resource does. Because Scrubber also works on cards found in HQ and R&D, it has more universal value. Miss Bones is a more specific counter to horizontal decks. She is also 2 influence, which is why she is unlikely to be found out of faction. If I were to play criminal at a high-end tournament, I would definitely consider slotting one of two copies. When Miss Bones delivers, she Delivers.