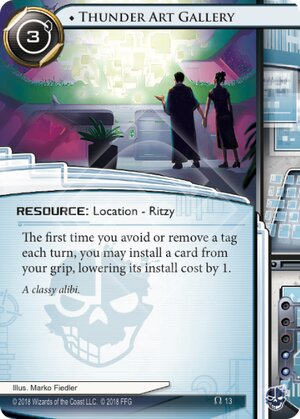 The first time you avoid or remove a tag each turn, you may install a card from your grip, lowering its install cost by 1.

A classy alibi.
Illustrated by Marko Fiedler
Decklists with this card

There are two ways to look at Thunder Art Gallery: as a tech card against tags, or as part of a synergy deck based around tag removal or avoidance.

First, the uses as a tech card. One of the things that Thunder Art Gallery does is that it effectively upgrades the "remove tag" basic action, to allow an install at the same time (once per turn). It's much easier to see what it does if you think of it as upgrading the "install" action, though, making it more or less equivalent to the following hypothetical resource:

Once per turn, when you install a card with an install cost of 1 or more (not through a card ability), you may pay an additional 1 to remove a tag.

That's a pretty good effect, against some decks! Removing a tag for 1 and no clicks is much cheaper than tag removal normally would be, and most decks have quite a few cards they want to install.

There are two real problems with using this as a tech card, though. The first is the hit to install it; you're spending 3, , plus a card and a deck slot, on installing your Thunder Art Gallery. The second is the fact that it only works once per turn. Taking these two facts together, to be worth it as a tech card, you would probably need to untag yourself on four separate turns (installing something each time) to get a meaningful gain. It's certainly possible to imagine a Corp deck which likes to repeatedly land single tags on you, without directly punishing them; some SYNC: Everything, Everywhere or NBN: Reality Plus will, for example. However, only a minority of tagging decks use this sort of "tag-based grind"; more often you're going to come up against Hard-Hitting News or Public Trail or the like, and Thunder Art Gallery is the wrong tech card to use against those sorts of decks – and of course, many Corp decks don't tag at all! So in short, this is an effect that you could plausibly want in a sufficiently weird metagame, but it's unlikely that the metagame will ever reach a state in which playing this as a tech card is worth it; generally speaking, you'd prefer a more generally applicable tech card like Networking.

So if you can't rely on the Corp deck to tag you often enough to make your Thunder Art Gallery worthwhile, what about placing the tags yourself? Thunder Art Gallery is obviously no good in a "tag-me" deck (which relies on floating a lot of tags), so the main form of Runner self-tagging is out. However, there's also a less popular Runner strategy involving tags: using a combination of cards which tag yourself in exchange for a benefit, and cards that clear the resulting tags more cheaply than basic actions would (thus giving you a larger benefit than the tagging card would give you naturally). Thunder Art Gallery is, in effect, a support card for this strategy, giving you cheap clickless installs while your deck does what your deck does (and this sort of deck really likes clickless installs because it's spending so many clicks tagging itself). A discount of 1, on installs once per turn is obviously crazy (imagine if you could play as Hayley and Kate simultaneously and with no card type restriction!), but as the tradeoff to obtain that, you're going to need to design your entire deck around tagging and untagging itself (or avoiding the tags) as often as possible.

In order to make a self-untagging deck work, we need two main components: the cards that tag yourself, and the cards that cheaply remove or avoid the tags.

First, the self-tagging cards. Based on the name, and the set it came out in, Thunder Art Gallery was probably designed with Liza Talking Thunder in mind, but she has been banned; and the most popular card which tags yourself in exchange for a benefit is Account Siphon, but that has rotated. So nowadays, we typically need to rely on cards that don't see much play outside this sort of deck. By far the best is Rogue Trading, which is likely to be an automatic 3-of in any Thunder Art Gallery deck; it's an economic card with a lot of longevity, but a value that scales based on how cheaply you can remove a tag (and the whole point of this sort of deck is to cheaply remove tags, so Rogue Trading is likely to be quite good). There's also Hot Pursuit, which has the issue that you need to be able to make successful runs on HQ, but which gives a decent amount of economy in return for a tag when you do. (I've also had decent success with Credit Kiting in a deck that's designed around it, but that's a lot more niche.)

Second, the self-untagging cards. My first thought (and many others' first thoughts) will likely be Jesminder Sareen, who is able to avoid tags as her ID ability. This synergises well with Hot Pursuit (which is normally an automatic 3-of for her despite being out of faction). The problem is, it doesn't really synergise well with anything else nowadays (you would have to resort to obscure cards like "Baklan" Bochkin to do more self-tagging during a run). The other problem is, Jesminder is a Shaper, but Thunder Art Gallery is a Criminal card, as is almost every self-tagging card. So Jesminder will end up running out of influence very quickly when trying to make a deck like this, and will have to play very suboptimal cards to do it. I don't think that sort of deck can work; Jesminder loves her Hot Pursuits, but can't go further enough along the path of self-tagging to make Thunder Art Gallery worthwhile on top of that.

Even though the main untagging identity is a Shaper, though, there are still good self-untagging cards floating around in neutral and Criminal. Networking, for example, saves you 1 whenever you remove a tag and does not require installing; that might be enough of a benefit to make this sort of deck work, but probably isn't enough by itself. However, there's also Citadel Sanctuary, which is close to a perfect fit for this sort of deck; it allows you to untag yourself once per turn with a trace[1] (in addition to acting as tech against Punitive Counterstrike, Clearinghouse and City Works Project). One drawback of Citadel Sanctuary is that you need to be fairly rich to avoid disaster, as you'll have no chance to react if the Corp pumps the trace. Another is that you will need link to keep the expenses down (in particular, it works much better as a 1 runner than it does as a 0 runner). However, unlike the drawbacks of the various other possible combinations, these drawbacks are managable (especially because Rogue Trading itself will help you get out of the economic danger range).

Given the current list of banned and rotated cards, I think that (at least in Standard) Thunder Art Gallery works in exactly one deck: a Criminal deck that is based around tagging and subsequently untagging itself most turns, using at minimum a combination of Rogue Trading, Citadel Sanctuary, and link. (You won't play against appropriate Corp decks often enough to make it a viable tech card, and it doesn't have enough synergy to be playable unless you're playing those two cards specifically.) You'll also need a lot of things to install (meaning, most likely, you'll be running a resource economy), making the deck it goes into even more specific. So this card is likely doomed to be niche forever; you can't put it into just any deck, you'll have to be designing your entire deck around it.

"Niche" doesn't necessarily mean "bad", though; a card that only goes in one deck can nonetheless be playable if it's a sufficiently good deck. And based on my testing recently, I think it is indeed a sufficiently good deck. (This shouldn't be all that surprising, given that the Rogue Trading + Citadel Sanctuary combo is strong enough to have seen play even without additional support cards beyond a 1 identity.) I've been winning above 50% with it in practice games, which is much better than I normally do as Runner, especially given how Corp-friendly today's metagame is; the Thunder Art Gallery deck is probably the strongest Runner deck I've ever built (although I'm much better at building Corp decks in general, so being a good Runner deck by my standards probably doesn't mean that you'll be winning tournaments with it).

So I think this is a well-designed card; its inflexibility means that it won't be dominating the tournament scene or anything like that, because it isn't going to fit into the goodstuff/"regular" decks that Criminals often end up playing, and is even less likely to work out of faction (with the possible but unlikely exception of Sunny); but it has the right sort of power level to make the one deck it does go into playable, and help make the world of viable Runner decks a little broader.