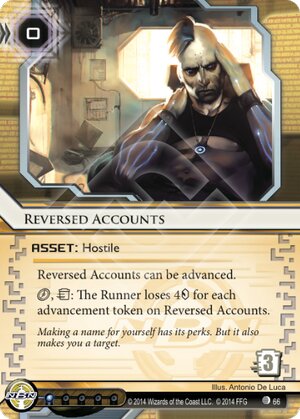 Making a name for yourself has its perks. But it also makes you a target.
Illustrated by Antonio De Luca
Decklists with this card

When it comes to assets sometimes you either ignore(for a bit) or you have to deal with immediately while playing as the runner. Reversed Accounts is one of those assets. Lets face it, sometimes you don't trash a PAD Campaign regardless how it's accessed(HQ, R&D, Remote). I've even let Jackson Howard slide sometimes. The pure evil that is Reversed Accounts can't be denied.

Zero Rez cost. One Influence. The card can be advanced. The pain this card brings if you trigger its ability can be felt for many turns thus giving the Corp scoring windows. This card WILL force a run if baited properly. Cuz the moment the runner accesses it in a remote, they HAVE to trash the card. Otherwise, next turn they will be bankrupt. In the end, the runner either pays to trash or they'll pay in a way that sucks. And if they access in HQ or R&D you better believe they'll trash the card. If they had to break ice to access then run just got more expensive.

I love this card. The low influence makes it an easy splash in just about any Corp. Weyland Consortium: Building a Better World, Jinteki: Personal Evolution, Jinteki: Replicating Perfection and Near-Earth Hub: Broadcast Center are perfect for the card.

This card got a new best friend named Bryan Stinson and thus it creates multiple win win situations. It's a must trash asset which is good and on top it's a trap you can't ignore. When you get it into a taxing remote you win either by the runner not running it and you can bankrupt him or by running it and bankrupting himself with your taxing ICE + the trash costs, either is fine from the corps point of view. The runner losing 4 Credit's per Advancement is great too.
On top of that when you have bankrupted the runner you can fire cards with Bryan Stinson like :

And especially in Cerebral Imaging: Infinite Frontiers you can fire cards like:

so in CI you can trigger them both in one turn, making them incredible strong and dangerous. Thus you can find them in the World Championship Deck 2017.

Along with GRNDL Refinery, which has been saved from rotation by our benevolent Boggsverlord, Reversed Accounts is an advanceable asset that massively swings tempo in favor of the Corp - but requires a decent amount of setup to be worth it. However, Reversed Accounts gets outperformed by GRNDL in terms of extensibility; there's no hard limit on the number of you can earn, whereas the Runner can never go into debt (which makes them approximately 999% more fortunate than most of the world). To pay off for this, Reversed Accounts is pricier to trash at 3 versus 2, and takes one less pip of influence to slot out of faction. This makes Reversed Accounts a good partner for GRNDL Refinery in Weyland decks as tempo control, and as an advanceable asset in native NBN decks.

Unfortunately, this card definitely suffers from 46th card syndrome. Closed Accounts is capable of doing much more in fewer clicks, despite the tag requirement. If you're reversing accounts in NBN, there's not a lot of use cases where you wouldn't get more mileage out of closing them instead.

Reversed Accounts is an asset, which means it takes 1 to install, 1 and 1 to advance, and 1 to activate. Compared to Closed Accounts, that's a 300% cost in clicks for a 4 swing vs an all- swing. Alas, the click to makes this much like our good friend Alix T4LB07 - it removes the chance of popping this on the Runner's turn as a surprise, which severely limits its functionality

This doesn't mean Reversed Accounts is useless, however. It definitely has a place with Dedication Ceremony for a 12 tax that can be done in a single turn (install, rez, dedicate, fuck up the Runner). Other cards like Mumbad Construction Co. or Hollywood Renovation can make this tax even heftier.

In short, this card has few good use cases, but it has value in, say, a Gagarin asset spam deck where tagging the Runner is not to be expected, and where robbing them of the critical needed to access a server can be game-changing.