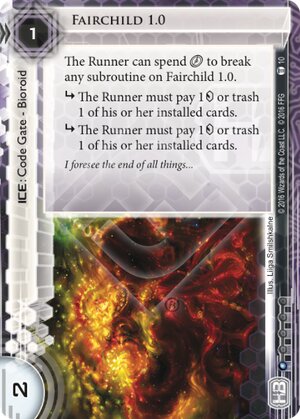 The Runner can spend click to break any subroutine on Fairchild 1.0.

subroutineThe Runner must pay 1credit or trash 1 of his or her installed cards.

subroutineThe Runner must pay 1credit or trash 1 of his or her installed cards.

I foresee the end of all things...
Illustrated by Liiga Smilshkalne
Decklists with this card

Fairchild is one of the cheapest bioroids on the market. At just one credit, it's extremely cheap. The first comparison, of course, is going to be to Pup which functions very similarly a large percentage of the time. You spend 1 credit to rez it, and the Runner spends 2c whenever they pass it. Seems reasonable. The nice thing about Fairchild as opposed to Pup is that its strength is 2 rather than 0. Of course, you aren't often going to bother breaking the subroutines, but being a little more resistant to Parasite is a nice advantage to have.

Fairchild also has two 'alternative payments' which can be made to Pup's sole available alternative of 'take some net damage'. Fairchild can be broken with clicks, or the runner can trash their stuff. Neither of these are very appealing most of the time. Losing two clicks is pretty much entirely worse than losing two credits, since it's either the same (clicking for credits) or better (doing basically anything else). The 'Bioroid' text on this ice is not very relevant - although it does allow for it to benefit from Brain-Taping Warehouse, Haas-Bioroid: Stronger Together, and so on. Paying in installed cards is also not a particularly effective solution, since they also often cost a click and a card or more to get there.

Note that the wording is 'the Runner must [X] or [Y]'. This is not the same as Pup - the wording is closes to Troll and Forged Activation Orders. There is no default choice and you can't pick an option without being able to pay it - the same as how if you don't have any credits during Forged Activation Orders, you can't choose the 'rez' option and then fail to pay to rez it - you have to choose the option you can use, which means if you have no credits you have to trash an installed card (or spend a click) and if you have no installed programs you have to pay a credit (or spend a click).

Very cheap, always reasonably taxing, harder to Parasite than Pup. If you want a cheap code gate to hit the runner's efficiency, look no further.

(23 Seconds era)
Isvan 679
What happens if the runner is on zero credits and has no installed cards (unlikely but could happen). Do they just let the subroutines fire and giggle a little as nothing happens? — lunchmoney 19 Jul 2016
I'm inclinded to think nothing happens lunchmoney. The runner does as much as they can if they're required to do stuff. — x3r0h0ur 30 Jul 2016
The saddest thing about Fairhichild is that unlike Pup it's a Code Gate and unlike Pop-Up Window it has no on-encounter benefit. What these two things in combination mean are that once Yog shows up this stops providing even a basic tax. — LordRandomness 1 Aug 2016
True. Yog is a bit less common since it hit the MWL though. This thing will be really scary once Yog.0 rotates though. — Isvan 1 Aug 2016
Yog.0 is core set, so it's not going to be rotating... — WiseKensai 3 Aug 2016
Nicely splashable at 1 influence as well.Could see a roll for this little guy in Replicating Perfection — FreqKing 7 Sep 2016