This is the deck I took to NISEI's Black Lives Matter tournament. I am so happy with my results at my first tournament--especially one dedicated to such a great and personally important cause. I want to share both my unique decklist and my experiences running.

First off, recommended changes in case that's why you're here:

NISEI's new banlist meant I expected the field to be wide open. Historically, I've been a bad runner player and a worse deckbuilder, but I did have two ideas that helped me arrive at a novel decklist:

There's no shortage of great things for the runner to install and plenty of burst economy as accompaniment. That's why all my corp decks either spammed assets, rushed agendas as fast as possible, or had a Punitive Counterstrike plan. If the runner just had time to install everything, they would never lose, but as you'll see when I write up my Sportsmetal, even 1 click spent installing something useless like a Kati Jones could mean an instant defeat against fast decks. So I wanted a runner that could compress clicks. The obvious candidates were Hayley and Hoshiko, who both got new toys and have an ID ability that inherently grants click compression.

But it's been my long maintained belief that when you have to face a variety of unknown decks, you should just take Leela. Some decks will mulligan into hands with 0 ice and completely fold to doof; combo decks can turn into jank when they have to contend with her ID; and any good deck can lose to a bad bounce. Plus, with Engolo coming off the MWL, it seemed that there was a green light to experiment with good-stuff crim that didn't have the dreaded turtle.

Was there a way I could combine these two ideas? Well, Leela doesn't give click compression, but she taxes Corp clicks, which can be just as good. She can contest early and keep up pressure, but I wanted to smoothly ramp into the late game losing as few clicks as possible even against glacier style The Outfit: Family Owned and Operated decks. Yes, I thought the early fight, late game power, and steady click compression was possible with an easy to underrate and misunderstand card: Net Mercur. I've all lost plenty of games in jnet casual to a Smoke who puts together a huge rig and gets 1000 stealth credits on Net Mercur. But by far the most valuable part of Net Mercur is drawing a card every single run. Not a measly two cards per turn like Hoshiko Hoshiko with DreamNet, but up to four cards per turn doing the thing you always wish you were doing anyway. And yes, Net Mercur can always be a bad publicity, something I thought could help against the expected barrage of asset decks.

I jammed Engolo, Net Mercur, and the necessary stealth support. With Corroder, that was 14 influence down. I spent my last point on Hunting Grounds so I could win the Argus matchup or against any cheesy GameNET. (Spoiler alert: I installed the Hunting Grounds once and it definitely should have been a Turning Wheel.) Everything was turning up aces in testing: Afterimage shuts down Tour Guide and Surveyor and Security Testing stayed on theme with run-based economy.

Most importantly, with 4 cards drawn mid-run, how could I possibly lose to Punitive Counterstrike? 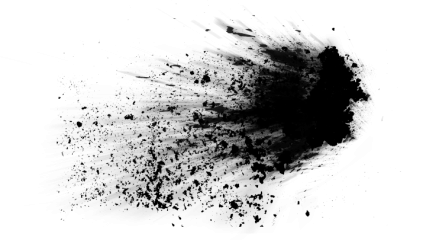 Let's start with the first game in the top cut. I was second seed, so I happily picked my Leela into an Outfit that I expected to be on Punitive. I mulligan'd and got the worst possible hand: all 3 breakers and a Special Order. I managed to stabilize after the first City Works Project went past, hit a huge Embezzle, and get most of my rig installed. Sadly, not Net Mercur.

Then I got blown up. Do yourself a favor and go to 9:55:00 in the VOD and see if you can't count the approximately 20 ways I punted: missing credits on my Taka, not letting a Bulwark sub fire, not paying into the first trace to force the corp to have triple Punitive. Punitive math can be a lot harder than it seems, and I will be taking remedial classes.

But let me draw your attention to the most heartbreaking punt of all: 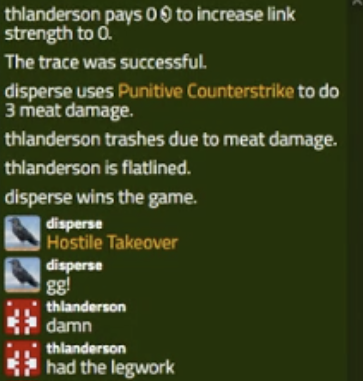 Hostile Takeover was in hand so I could have played Legwork and had a 75% chance of winning and never have to worry about Punitive. Never forget that Legwork has a habit of closing games!

I lost my other game with Leela in the cut to the winning CTM deck. Fair enough, I took some bad lines and never quite got off the ground. I knew it was a hard matchup.

Otherwise it was smooth sailing. I beat a super flooded RP (that matchup is gas for this deck, so I was never worried), kept my wits about me against a traps-based Harmony Medtech, and dismantled a Blue Sun in a really tense game that was definitely the highlight of the tournament for me. There were some others, and overall it was a great day before the cut, and a well deserved beating in the cut to some great players with excellent decks. Shout out to all the BOSWASH players in the cut and the tournament!

I've run through my overall deckbuilding philosophy and many card choices. Here are a few I didn't get too.

You have one very clear priority when taking the mulligan: find cards to play that give you credits. Like all crims, this deck tends to fall apart when you have a full hand of breakers and events and no money. Mulligan for Sure Gamble, Daily Casts, Career Fair, PAD Tap, Blueberry!™ Diesel, and that's about it.

A huge thank you to all my opponents, the commentators, the donators, and the tireless organizers for a wonderful tournament.