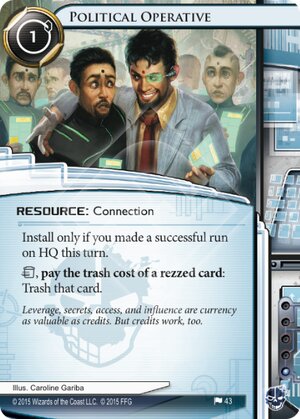 Leverage, secrets, access, and influence are currency as valuable as credits. But credits work, too.
Illustrated by Caroline Gariba
Decklists with this card

The important timing rule to note (according to Page 21, Column 2, Paragraph 5, of the Core Rule Book) is that the active player "can trigger as many paid abilities, rez as many cards, and/or score as many agendas as he wishes in the order of his choosing" before passing priority.

This means PolOp cannot prevent the Corp from rezzing and immediately using Jackson Howard, Marcus Batty, Thomas Haas etc. Since Caprice and Ash only triggers after a window, PolOp is able to trash them in the same window in which they are rezzed. Councilman, which is in the same card pack, would be able to prevent the rezzing of those cards for a turn.

Man, oh man. This is going to shake the meta up. A lot.

First things first. It's a 1-cost, 1-influence Connection with a trash ability. Off-Campus Geist loves the shit out of this card for that reason alone, especially given that Tech Trader is now a thing which exists. Throw in a couple Fall Guys and let the good times roll.

But that's just the surface. This card delivers a whole world of hurt to any deck running assets and upgrades.

Assuming that you're running HQ once in a while anyway (and of course you will be), it costs you a click and a credit to install this card. In return, it lets you trash a card without needing to run.

This already saves you a ton against glacier decks. Corp trying to run out an Adonis Campaign in their scoring remote? That's not happening. Being Blacklisted by Chronos Protocol? This guy will handle it. The existence of this card means that no asset is safe, no matter how much ice you put in front of it.

But there's more. Oh yes, there's more. The trashing is a paid ability. Instant speed. Which can be used in the middle of a run. Meaning that Caprice Nisei is dead as soon as she is rezzed, and Ash not long after. Meaning that you can kill that Dedicated Response Team before the Snare! tags you, saving your goshdarned life.

Of course, the card has to be rezzed. But if the corp is refusing to rez something, that's a victory by itself, and there's always Drive By in case you need something dead before you even see it, or if you can't afford the trash cost.

There is one regrettable thing about this card, though. A lot of two-word card names get abbreviated: ProCo, CyCy, Mopus, that sort of thing. And Political Operative has a rather unfortunate one.

PolOp and councilman are going to turn the meta on it's head for sure, though above all it feels like they are a-little-too-much-ash/caprise-combo-hate. Because lets be real, the first thing everyone thought when they saw those cards is "punch foodcoats in the face". Which probably needed to happen to some degree, foodcoats was not only choking out the meta, but choking out other HB identities very hard. While these cards where probably needed in some way, it does feel like a bit of overkill, and PolOP should DEFINITELY be more influence. I won't be suprised if it goes on the MWL eventually. It feels like a card that was meant to catapult criminals out of the slump they were in, but instead at only 1 influence will just get splashed into the other top tier decks to make them even more overbearing.

HOWEVER, perhaps one thing that is being overlooked a bit much, is that first clause that the runner has to make a successful HQ run to put down a PolOp. Early on, yeah they will probably get at least one out, but if you are adequately icing up HQ, even though polop itself only costs 1 to install, if it costs them 6 credits to get to HQ , polop is now a 2 click, 7 credit card to install, and if they trash, say, an ash, the total cost is 2 clicks and 10 credits to trash that ash. Throw on a crisium and that's another run and the 5 to trash crisium, meaning that single ash took 3 clicks and 21 credits to take down. I wouldn't exactly call that a bargain. Don't forget the ever-more-popular card Hostile Infrastructure, which means your polop still makes you take a net damage. Early game yeah polop will still be a huge player, but I think people are underestimating how much it will fall off in late game or at least how much harder it will be for the runner to get more than one out.

One last thing, though, If I understand the rules correctly, you CANNOT use whizzard credits to pay for PolOp, since PolOp is doing the trashing and you are paying for the ability rather than the trash itself. Is that correct?﻿

(Democracy and Dogma era)
ChairmanHiro 454
I also think that Whizzard creds are not usable for these since it's a card ability. — valerian32 3 Apr 2016
At least in crim you have sneakdoor and feint to guatatee those successful HQ runs — gamblingworld 5 Apr 2016