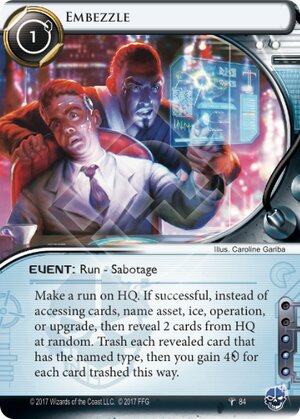 Make a run on HQ. If successful, instead of accessing cards, name asset, ice, operation or upgrade, then reveal 2 cards from HQ at random. Trash each revealed card that has the named type, then gain 4credit for each card trashed this way.

A fun card with a potentially powerful effect. I've been playing a few games on jnet and trying to get this to work in conjunction with Wari. With Wari installed I can do the following:

-Use Silhouette, 419 or other expose to learn the subtype of a piece of ICE not guarding HQ.

-Spend 1 to play Embezzle and make a run on HQ, paying my way through any defenses.

-Use Wari to add the above referenced ICE to HQ.

-Name ICE and hope to reveal two ICE. Trash them and gain 8s.

In practice, it is difficult to pull of and probably not worth it. The few times I made the successful Embezzle run, I revealed just one ICE, netting me just 3s, an uninstalled ICE, and a trashed ICE. However, the play just felt good, and I'm going to try it a few more times in hopes to reveal 2 ICE.

Using Embezzle with Wari gives you a bit more information and a bit higher chance of success. But in general you don't have a lot of knowlege of what is in HQ. So just throwing Embezzle out there is probably not worth it unless HQ is unguarded. And with the now balanced Account Siphon released, you probably won't find HQ unguarded anymore (especially versus Criminals where the restrictive influence cost will keep this card).

So I'm throwing Embezzle in the jank pile; where I happen to live.