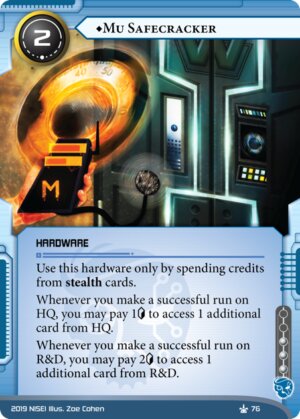 Use this hardware only by spending credits from stealth cards.

Whenever you make a successful run on HQ, you may pay 1credit to access 1 additional card when you breach HQ.

Whenever you make a successful run on R&D, you may pay 2credit to access 1 additional card when you breach R&D.

Illustrated by Zoe Cohen
Decklists with this card

Extremely difficult to justify given the great synergy between Stealth and The Turning Wheel, and the additional costs to use this. Shapers would be using it almost exclusively for HQ, but then why not just play HQ Interface if you need that effect? Or The Gauntlet? You'll save credits and influence. Criminals would be using it for R&D, but at 2 stealth credits per use, that gets extremely expensive very quickly, and Criminals don't get Net Mercur in faction, nor get to be Smoke (note that DJ Fenris doesn't gain the Stealth subtype even if he copies Smoke.)

With the additional costs and the 3 influence requirement, I don't think this is playable.

I mostly agree with this - I would say the one exception would be in a stealth Leela build where just that one extra access can have a significant effect.

Good analysis and I agree completely

If you're running Psych Mike, I could see it being used in conjunction with that, especially with multi R&D Access.

I think the point of this card is in startup format, where things like The Turning Wheel and HQ Interface are not available