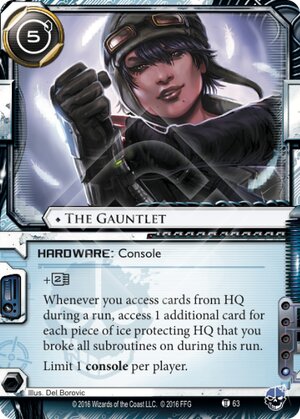 Whenever you breach HQ during a run, access 1 additional card for each piece of ice protecting HQ that you fully broke during that run.

I think this makes for a serviceable replacement to stacking HQ Interface and will be much more relevant once HQI cycles out.

You get the average access power of about 2 HQIs for only 5 credits and a single card. Plus 2 memory on a Criminal console is very nice.

Another noteworthy advantage of its card is its rock-bottom 1 influence cost, so is very easy to splash.

The biggest downside to the card is that it competes with many other great cards for the console slot. I think this card is great, but its another question entirely whether its worth having over other consoles.

Another consideration to make with this card is that it doesn't work with Gang Sign.

Overall I think The Gauntlet is a great card, if you can rationalise it over other consoles. It gives you a very simple method of multi-accessing HQ. Because your bypasses and derezzes in Criminal hurt your multi-access with this card I actually think it might be best played out of faction, maybe in a Shaper deck to supplement a focus on R&D pressure.

(Intervention era)
Grimmer 17
It's kinda complimentary to the Bird Breakers...where the birds change the vale proposition of rezzing expensive ice, this one really hits the value proposition of rezzing cheap ice. — analogBrad 14 Nov 2016
"Another consideration to make with this card is that it doesn't work with Gang Sign." — kevo31415 17 Nov 2016
ACTAULLY if you were playing against the new Jinteki ID where you can get redirected, ran on HQ, broke the subs on a piece of ice and got moved to a remote with plan B in it, and had gang sign installed, you get an extra card because you "broke all subroutines" on an ice protecting HQ during a run, and the corp scored an agenda causing Gang Sign to fire before the run ended. — kevo31415 17 Nov 2016
2

It's a shame this isn't as good in faction as it is out of faction. Being Khan's console, it's almost criminal that it doesn't synergize with her ability or breakers. Every console for Criminals will always be compared to Desperado, and this leaves a lot to be desired.

At only a single influence Shapers now have either an HQI each turn or endless repeatable Legworks (since 2 ice on HQ is pretty common). The corp will almost never ice more than two on HQ once this drops onto the table. I've been seeing this put to good use out of Smoke lately.

Thematically, it should be in every Whizzard deck from now until rotation because it's a Nintendo Power Glove.

(Intervention era)
magikot 1982
Well, technically, it does synergize with Birds, as you need to break all the subs with a bird in order to derez the ICE with it. And with this console you can constantly hit HQ while forcing the Corp to rez an expensive piece of ICE over and over, while getting multiaccess out of it. You are usually going to get an HQI value from this console, while paying 1 extra coin for 2 Mem, which is not bad at all. — Shieldwall 16 Nov 2016
In faction it seems like it puts the Corp in a tricky situation. Leave HQ lightly iced and get Siphoned into the ground. Put heavy ice on HQ and get HQ cleaned out by Gauntlet. — FightingWalloon 9 Dec 2016