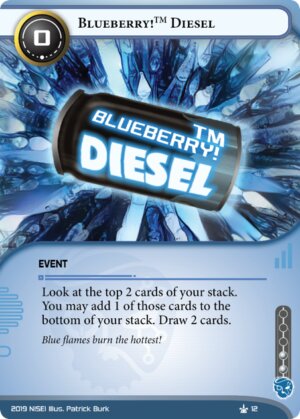 Blue flames burn the hottest!
Illustrated by Patrick Burk
Decklists with this card

Reviews for this keep calling it a draw card, and it just isn't. It costs 2 to draw and play this, which you could have just used to draw two cards the regular way. (This isn't quite true if you draw it using some other effect, but even then it could have been some other card).

The trade-off for this card is therefore that it moderately delays your draw in favour of making it slightly more filtered. That's, erm, only very slightly better than nothing. Then again, it is better than nothing, which made me think BbD would be an auto-include for most crim decks when I first saw it. Why wouldn't you want free filtering, and an effectively slightly smaller deck to boot? The answer is that the delay to your draw is more noticeably annoying than you'd think. Starting your turn with BbD in hand, or drawing into it, effectively means it will cost you a to see your options for the turn, and although it's paying for itself in terms of long term economy, it's making your short-term options more of a faff. In a game where a single can make the difference between snatching the winning agenda and not, the negative impact of this card is far more memorable than its benefit.

That said, I think there's a more human reason why BbD isn't seen more often. Keeping runner decks down to size is hard. If your deck is 42 cards + 3 BbD, the odds are you can think of a ton of other things that can go in those slots. Although it's a valid argument that small decks are good, so a virtual 42 cards is better than an actual 45, in reality it's psychologically difficult to devote three slots to cards that do little more than replace themselves when there is so much cool stuff you could be playing instead.

I initially invested a total of $105,000 over a period of 5 weeks my broker. My bonus/profit was $402,798 every attempt to make withdrawal failed and i was instructed to make another deposit of $25,000 before I can make withdrawals which i did. Yet i unable to make withdrawals and all attempt to contact broker proved futile . This is very pathetic and i felt so bad losing my investment. I did a due diligence test before investing with them but guess what I ended up getting burned. This is to create awareness, not everybody can be as lucky as I was. I'm saying this because I was able to recover my funds. Thanks to this recovery team, they have the best wealth recovery experts…Contact their mail for more inquiries cryptorefunder360(at)gmail(dot)com, Thought someone might find this information useful.

I think people are underestimating this. It finally gives Crim a inf-free draw option without the massive downside of Fisk. (I don't like giving the corp cards at all.) And I think the combination of the fitering and not having Fisk's drawback makes it feel like a good source of burst draw with a little filtering to sweeten the deal. it saves you 2 dots of inf per copy over normal diesel which is nice for crim ids that want to spend their inf elsewhere. I actually really like this for Khan especially given she's only 12 inf

To be fair, if you run HQ Interface and Legwork, then Fisk Investment Seminar's downside of corp draw can be an upside. The real advantage of this card over it as in-faction draw is that it's not a Priority event, in my opinion. Frees up your Priority click for going fast or looking cool or making friends, etc.

Blueberry Diesel only gives you TM.

It's fine draw in-faction for crim, I guess, but the design couldn't possibly be less original. Obviously.

(Downfall era)
Dirjel 281
Yeah, I don't want to be immediately negative about the card, but from my perspective, it's just a strictly worse Diesel. Diesel shows you 3 cards, and if you're not wreckless, you play it on click 1 or 2 so that you have enough clicks to respond to what you draw before trashing having to discard them to get down to hand size. Blueberry Diesel (BBD) let's you see two cards (okay, information) then select which one you don't want. Then you draw 2 cards. If you had just regular dieseled, you would have just drawn all 3 cards anyway, so who cares about the filtering. I feel like BBD should have let you draw 3 cards, add 2 of them to the bottom, then draw 2. — Chezni 4 May 2019
But BBD is in faction for Criminals :), Diesel is not. I like it! — maxitaxi777 5 May 2019
That's fair--if you're already in Crim, it's an influence-free draw option. — Chezni 25 May 2019