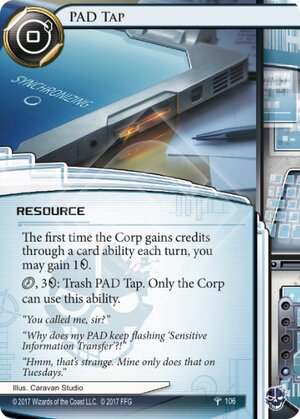 The first time the Corp gains credits through a card ability each turn, you may gain 1credit.

click, 3credit: Trash PAD Tap. Only the Corp can use this ability.

"You called me, sir?"
"Why does my PAD keep flashing 'Sensitive Information Transfer'?!"
"Hmm, that's strange. Mine only does that on Tuesdays."
Illustrated by Caravan Studio
Decklists with this card

A sleeper card in an absolutely stacked datapack, PAD Tap is drip economy with an interesting trigger: it pays you when your opponent gets paid. Flavourfully Criminal, this card’s best-case scenario is that it pays you 1 on your turn and 1 on your opponent’s turn. To top that scenario off, you’ve got enough Fall Guy installed to dissuade the corp from even thinking about trashing these (unfortunately PAD Tap does not combo with Wireless Net Pavilion).

However, we should never judge a card by its best-case scenario and instead judge it on what its expected results are. With that in mind, here’s a breakdown of cards that trigger PAD Tap that are ubiquitous in the meta:

Possible on both Turns: NGO Front

Possible on both Turns: Hortum

Possible on both Turns: Pālanā Foods

Corp’s Turn: All The Clearances!

Possible on both Turns: Sportsmetal

As you can see, the above lists aren’t fully comprehensive but they cover quite a large majority of the popular economy options available today. At one influence, PAD Tap continues the blue trend of being under-influenced (see Aumakua) so you can splash for it with relative ease.

There’s one more consideration to be made though and that’s that it comes with a pre-built trashing option. Given that a smart corp player will trash PAD Tap knowing the potential money their deck could make the runner, PAD Tap has a great home in the economy denial archetype. One last thing: PAD Tap doesn’t trigger when the corp clicks for credits but if you’re at the point in a game where your opponent is forced to do that, you as a runner have probably already won.

(NAPD Multiplayer era)
BlackCherries 347
Anyone got ideas on what cards don't trigger PAD Tap now? I can't think of any. — BlackCherries 30 Oct 2018
2

This will probably fire most turns. If the corp isn't gaining credits through some ability or another, they're probably losing. Worst case scenario, one of these drawn early will cost the corp a click and 3 credits, so this is an effective tactic for delaying corp plans about as much a reverse Hedge Fund.

If you see one of these early, playing it is usually part of the best turn available. Late game, it's less valuable, but still probably valuable enough to play.

If the corp lets Pad Taps survive (probably because they are financially strapped or because the end is in sight), every money-gaining option gets less appealing. Every "the corp gains $1" subroutine becomes a potential liability. In case Tithe wasn't hurting enough, now it's a double agent for the runner.

The flavor text doesn't fit the story very well. Unless the corps are a lot more forgiving and/or incompetent than we've been led to believe by every other card, it'd be odd if corporate employees were blase about doing something which might get them murdered. If a company has dedicated response teams, kill teams, contract killers, secrets punishable by death, cricket-bat psychos, yakuza on speed-dial, or seppuku at gunpoint, it's probably a very unusual employee who doesn't care whether the security department thinks he's a problem. Most of the other corporate characters with major individualistic streaks usually have a more interesting explanation than incompetence (e.g. Exile's grief or Emelyov's warlike nature or Cortes' megalomania). Also, if corporations have taken over most of the universe and are supposed to feel threatening, it should take more to fool them than getting a haircut.