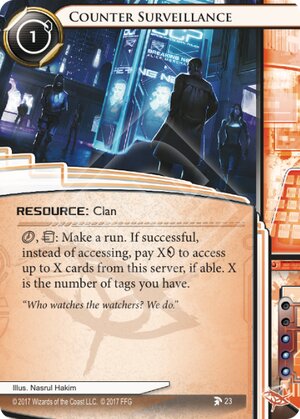 click, trash: Run any server. If successful, instead of breaching the attacked server, pay Xcredit if able, where X is equal to the number of tags you have. If you do, choose a number less than or equal to X. Access that many cards in and/or in the root of the attacked server. (If you cannot pay, you will not access anything.)

"Who watches the watchers? We do."
Illustrated by Nasrul Hakim
Decklists with this card

OK, I have to say it. I hate this card, and I hate its design.

In A:NR, tags represent the fact that the Corporation knows who the runner is. With one tag, they can already try to kill him, make him poor, take back some agenda, trash his stuff, etc. With two tags, they know enough about the runner to use a surgical strike (or two). With more tags, they can do weird things. In any case, a tag is a handicap for the runner.

Now, the runner can survive with this handicap. Strategies exist for the runner: keep the Corporation poor (Account Siphon, Vamp, Lamprey, Wireless Net Pavilion, Fall Guy), put on some protection (Plascrete Carapace, Sports Hopper, Brain Chip, etc.). I think that the tag mechanism is great because it makes for interesting timing decisions. Look at the 2016 Worlds finale to convince yourself. Floating tags is doable, but is always a tough decision.

There is a similar element on the corp side, and that's bad publicity. Getting bad publicity is annoying for the corp because you are giving the runner money to access your precious servers and trash the precious assets that you set up with all your love. And while this may not be as punishing as being blown up, there are very few ways to remove bad publicity, and it gets rid of very few of them.

So recently, the game designers decided to make tags a good thing for the runner. I think Data Leak Reversal was already a bad design. Together with Citadel Sanctuary and Power Tap, you want to get tagged, and you make money while doing so. But then, Jarogniew Mercs protects you from damage, Counter Surveillance gives you a lot of accesses, Obelus gives you the draws and the hand size protection, and Mars for Martians gives you the economy. And Valencia's bad pub protects you from The All-Seeing I.

There has been a couple of Corp cards that benefit from Bad Pub. Ireress is a very bad one: it only negates your bad pub, if the runner runs on the server where you installed this ICE. Illicit Sales gets a pass because a) it is very funny, b) it is not super powerful, c) 3-for-1s are not that great, and d) there is no good way for the Corp to negate scores of bad publicity.

Now, in my opinion, both tags and bad publicity are things that help the other side. In a sense, they could totally ignore it. The Corp could decide that, while they know the type of cereals that the runner eats for breakfast, they will dump all this information and not use it. Actually I believe that, since tags and bad pub can be beneficial to the party who has them, there should be a way for the other party to remove them at no cost.

An interesting card with an enticing effect. If you have a lot of tags you can make a really deep dig into, usually R&D.

Tags allow the corp to trash resources so you'll want to install Counter Surveillance the turn you play it. That's not a major issue given the potential payoff.

The last situation is likely most common and it requires a radical rethink of your deck. It turns out there aren't that many ways to tag yourself as a runner. Here are the ones I've found up to Free Mars:

Of these options two jump out as most interesting. Account Siphon is a staple of criminal decks so if you use Counter Surveillance as a criminal it'll do the job nicely. Account Siphon is also an event, which means Same Old Thing can trigger it again (I guess I don't need to tell criminals that).

The other interesting card is Security Nexus, in particular because of some characteristics of Ms Lebeau. Sunny tends to be slow to set up so she needs big multi-access in the later parts of the game to win the race to 7 points.

Sunny also has a very useful connection Jak Sinclair. Jak lets you make a run without using a click, but you can't use programs. If you're going to use Security Nexus to bounce off ice and get a tag you don't need programs so you can use Jak-time to get your tag. If the trace of Security Nexus fails you immediately end the run so even with scary ice the subs don't resolve. That makes a Jak / Nexus run for tag an ideal chance to run at some ice in front of an interesting server, if the corp rezzes you know the ice and the corp spent some credits, if they don't you get to see what's in the server.

Jak is a resource however so he could be trashed if you're tagged. That's not a great deal for the corp though. If you have a Security Nexus Jak is free to install (Sunny has 2, Security Nexus adds 1) meaning it's pretty cost ineffective for the corp to trash him (2 vs 1 to reinstall). Nevertheless, if you're going down this route you'll want to have spare clones of Jak.

Because the Sunny breaker suite (GS Striker M1, GS Shrike M2, GS Sherman M3) costs 0 with Sunny's 2 you have space for money programs like Magnum Opus, solving the problem of getting credits without vulnerable resources.

There is another way to play Counter Surveillance however, one which doesn't require you to build your deck around it. You just throw it in an anarch deck as a one-off and use it if the corp pulls something like a Hard-Hitting News to make them regret that decision. Seeing 4 extra cards is nothing to sneeze at and it could well lead you straight to victory.

Because Counter Surveillance needs either a deck built around it or is only useful against specific strategies it's not a widely applicable card. It does have a strong, potentially game winning effect though which makes it feel well-balanced.

(Station One era)
Silv 339
You forgot Vamp! — LynxMegaCorp 25 Mar 2017
Right you are, thanks. Will add that. — Silv 25 Mar 2017
I'd play it in a deck with Obelus and a bunch of Siphons. — quailman2101 25 Mar 2017
@quailman2101 I'm curious if that'd work influence wise. Siphons are 4 influence so if you put 3 in you have very little influence left. Not saying it can't be done but it'd require some excellent deckbuilding and hard choices. — Silv 26 Mar 2017
Easily done out of an Anarch (MaxX, or Reina if you don't want to deal with trashing key cards). Abuse Account Siphon with SoT and Dejavu, Wanton when you can to curb tag punishment and slow the corp down, etc. Once you've the money to access R&D, go wild! — LynxMegaCorp 26 Mar 2017
Yeah, I built a Reina deck with Obelus and 3 Siphons. This will improve that deck. — quailman2101 26 Mar 2017
Because most of your Siphons will come from Dejavu / Same Old Thing, you can remove a Siphon and slot either Levy, Planned Assault or some other thing you like. — LynxMegaCorp 27 Mar 2017
You forgot Paparrazzi. — Pantacruel 28 Mar 2017
@Pantacruel Paparrazzi is a nombo. It gives you the 'tagged' status for the purpose of meeting conditions that only specifies the runner be tagged. It does not with or supplement any card effects that require the runner to have x amount of tags. — iBreatheBullets 31 Mar 2017
Does this work with eater? I could see how it could and I could see how it doesn't because it does say "instead of accessing" I assume it does not though, — hutch9514 2 Apr 2017
2

This card probably shouldn't exist. Most strong tag-me cards shouldn't exist, because they reduce Netrunner to rock-paper scissors. Liza Talking Thunder is banned for precisely this reason. She crushes corps with no tag punishment and she gets crushed by tag-n-bag corps.

The one defense I can imagine for Counter Surveillance is that it has at least a possible purpose in a non-tag-me deck. It can serve as a last gasp for a runner who is losing to NBN badly enough to be reluctantly forced to go tag-me. Mind you, I've never actually seen it used that way...

If this card is played together with Obelus, do I draw before accessing all the paid cards (number of tags) are accessed? Because that's the way it is implemented on jnet at the moment and I am not sure whether that is correct.

Number of tags 10. I install Counter Surveillance, run and trash that card (run on RND) with Obelus installed. Now what happens? Do I draw 10 cards before looking at each single card of the top 10 in RND (like it is implemented) or do I access first, then draw (like I think) (is important against kill decks).