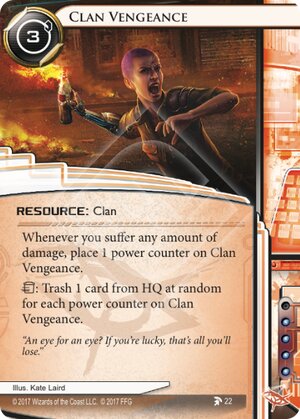 Whenever you suffer any amount of damage, place 1 power counter on Clan Vengeance.

trash: Trash 1 card from HQ at random for each power counter on Clan Vengeance.

"An eye for an eye? If you're lucky, that's all you'll lose."
Illustrated by Kate Laird
Decklists with this card

I've been playing this card some on jinteki.net, and just in case it ever becomes a thing I'd like to be in on the ground floor of saying that it is Way Better Than It Looks (TM). You heard it here first folks. Obviously it's a build-around card (It's pretty good Jinteki hate, but who's packing Jinteki hate?) requiring you to play lesser-used self-damaging cards like Stimhack, Stim Dealer, Amped Up, Net-Ready Eyes and even Titanium Ribs. Because your in-faction options are all brain damage, you'll want hand size increases too. Brain Cage is amazing with this because it's self damage AND handsize. You probably want to supplement it with at least one Public Sympathy for good measure.

That's a lot of Jank. I've been playing this out of Whizzard because he counters asset spam and lets you play a deck with some set-up time, which this card definitely requires. When Whizz rotates I don't know if this will be feasible anymore. It depends if anything else happens in the meta to counter the horror of Friends in High Places and related asset spam grimness (the last MWL only really cut off a couple of the hydra's heads)

Preamble dispensed with, let's assume that you've built up a bunch of counters on one or more of these babies. Is it worth it? Surprisingly I think it's arguable that the answer might be yes. For the Corp, a loaded Clan Vengeance is one of the most upsetting things it's possible for the runner to have installed. Its instant speed means that it's a constant threat. Every time the corp does something you could theoretically respond by trashing their hand. That's really unreasonable to play around. Here's a few things you can do:

1/ Run archives and trash HQ immediately before access. Do you like Legwork? As long as Jackson Howard isn't on the table this option is way better than Legwork. As a default use, this is a really strong option.

2/ Utterly counter any combo. Remember that this can be done as a response. The corp cannot Power Shutdown their deck. They can't count on having Accelerated Diagnostics after playing The Space Penguin. If they trace you with SEA Source or Midseason Replacements then the clan will protect you from targeted ordinance and civic redevelopments, no problem.

3/ Trash the corp's hand immediately after their mandatory draw. This option means that the maximum number of counters that has a practical use is six, not five as you might expect. It's also a handy option if you've seen the top of R&D and you disapprove of the line of play that it suggests.

4/ Make sure the corp isn't going to respond to your Medium by installing any ice.

5/ Trash HQ just before the Corp's last click. This option creates (even more) economy pressure. The Corp can spend their last click to gain a credit (inefficient) or to draw a card, which could potentially leave them with an agenda and nothing else in HQ. This is also the most satisfying time to smack down Friends in High Places. That's not a tactical consideration, but it is immensely gratifying.

6/ Trash HQ when the corp creates a new remote. Now that ice has nothing to protect. Alternatively, that agenda has nothing to be protected by. Or maybe they were planning to fast advance and they realised that they couldn't play their Biotic Labor before installing because...

7/ ... you should definitely fire this the moment the Corp plays a Biotic Labour with their first click.

I feel like I'm giving away a big secret by posting this review, because I haven't seen anyone else playing this, and even if it turns out that it isn't the best card in the world I promise you that it's an absolute blast use and abuse. Honestly though, it's actually pretty strong in the right deck.

An interesting card with the potential to throw the corp's whole hand into the discard pile for a massive tempo hit and possible agenda loss. Its weakness is that it requires you to suffer damage. That turns out to be surprisingly difficult to give yourself, except for the worst kind: brain damage. Net-Ready Eyes helps but is expensive to import. Same with Titanium Ribs. You could go for the cheaper to import Tri-maf Contact but then you have to find a way to trash it. The Price of Freedom comes to mind but that's also somewhat expensive to import (not to mention not very useful on its own).

Perhaps a better way of looking at Clan Vengeance is that it's a threat: come after me and I'll come after you. Now the problem with that is that if we're talking brain damage that generally doesn't come in large amounts (be happy about that) so it doesn't charge Clan Vengeance much. Meat damage does come in large packages but tends to require tags and if the corp has you tagged they can simply wipe Clan Vengeance of the table first. Net damage seems to be the sweet spot here, this card would do great against a Jinteki thousand cuts style deck.

If you do manage to get some counters onto Clan Vengeance there are a bunch of nasty tricks you can play with timing due to it having a trash ability. Sniping corp cards in the middle of a combo is probably not the most efficient overall play if you sacrifice a lot of work for it, but it's certainly an evil little trick to have up your sleeve.

Neat tricks aside I doubt this is actually a practical card. All that changes of course if you can somehow inflict damage on yourself reliably and in safe amounts. Perhaps the Red Sands will offer such a deal but I don't see the possibilities yet.

(Station One era)
Silv 315
It doesn't matter how much damage they hit you with, it only cares that you get hit, as such it's excellent agains 1000 cuts type decks like BoN or PU. — Amputret 25 Mar 2017
Not sure what ID to use but Heartbeat/ Plascrete with Net-Ready Eyes and Brain Cage lets you limit your damage and cycle through some cards to pile counters on Clan Vengeance. Along with some uninstalls and cheap breakers i wonder how it could work. Could work in Apex or Adam? — codychilton13 25 Mar 2017
I would be interested to try it in a Stim Dealer deck. — quailman2101 25 Mar 2017
@qiailman2101 I could see that being a lot of fun! — codychilton13 26 Mar 2017
@codychilton13 - I don't believe this triggers if you avoid the damage. You have to take the damage. — dzreams 28 Mar 2017
@codychilton13 Apex wouldn't be able to install this anyway, it's not a virtual resource — pbrand 29 Mar 2017
@pbrand Yeah I realized that after I posted the comment lol, @dzreams it only requires you take 1 damage for 1 counter so I'd avoid any additional damage past 1. So if something dealt 2 damage I'd trash a card to only take 1 through heartbeat. — codychilton13 6 Apr 2017
Did someone say “damage yourself reliably in small amounts?” — benhosp 19 Jan 2018