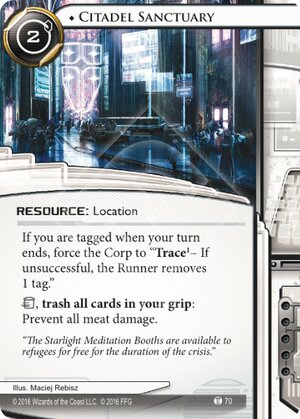 If you are tagged when your turn ends, force the Corp to "Trace [1]– If unsuccessful, the Runner removes 1 tag."

trash,trash all cards in your grip: Prevent all meat damage.

"The Starlight Meditation Booths are available to refugees for free for the duration of the crisis."
Illustrated by Maciej Rebisz
Decklists with this card

Mechanics aside (which gentlemen Gerrark and magikot described before me in great detail), I like this card because of its flavor. And this review will describe flavor only - if you are looking for actual applications of this piece, feel free to scroll past.

What is the Starlight Crusade? The art on the card I have recalled describes a woman that looks slightly like a nun, with a crucifix on her neck and a white clerical collar. Are they neo-christians? Well, no, even though they like to point at their link to medieval age Order of Templars. What is more accurate is comparing the Crusade to church described in P. K. Dick's 'Do androids dream of electric sheep?' - the Cult of Mercer.

Said worship included interfacing with a machine that, connected to a brain, would allow you to join minds with other believers and the cult's messiah Mercer himself as he walked uphill surrounded by people hurling rocks at him, letting you live through his cathartic suffering again and again in order to cultivate empathy. So-called 'Meditation Booths' technically have a similar idea behind them - neuroscience is the big thing in the world of Android, allowing the researchers to pinpoint the areas of the brain that govern mystical sensations. Starlight Booths stimulate these areas, giving you sense of enlightment, but devoid of any content and regardless of your personal views or imaginations about the afterlife. So while it fulfills social functions of a religion (which would be comforting you and giving you sense of stability), even despite it having some philosophy behind it (which, quite frankly, looks like some patchwork made from hindu and buddhist teachings more than something legitimate), it absolutely fails to do what religions were meant to do in the first place - give answers. A perfect cult for a consumerist world, putting instant gratification over delving deep.

Being a follower of Starlight Crusade would involve attending these booths in order to reach further 'levels of enlightment', which would mean readying your brain for even higher levels of stimulation. Of course, the organization charges you for using their contraptions, the higher the more enlightened you are.

So, the first effect of the card, the tag removal, is more of blending in with the crowd inside the Starlight Citadel than anything. The corps are looking for you, but since you're hiding away amongst some shady techno-sect, recently famous and well-regarded for giving refuge to those harmed during the Flashpoint crisis, they have to be extra careful trying to get to you. The second effect is more interesting.

How does a religious practice prevent getting a rocket to the face? Are you suddenly able to stop the missiles with the power of your will? Can you dodge a bullet because you are the One? No. We are to assume that you are physically hiding inside a booth when the Corp tries to come and get you. These things are built to last, but only so much when met with heavy firepower. The side effect is that the machine activates when you are inside, serving you - willing or not - mystical visions when the soothing impulses are delivered into your cerebral cortex. Whatever was important at the moment - the cards in your grip - becomes washed away with sensation of omniscience and you walk out completely bare-minded.

Compare The Noble Path and Emptied Mind. The latter would actually make for a legitimate combo if not the Corp ability to trash the resources when you are tagged.

EDIT 9/11/2019, super reminiscing revisition edition! Yep. Completely missed the parallel to the Church of Scientology there. My bad.

(Intervention era)
H0tl1ne 407
This is a cool flavor write-up, H0tl1ne. Is the material about how the Starlight Meditation Booths function mentioned in one of the Android novel? — umbralAeronaut 16 Nov 2016
Actually, I have pulled it out from Worlds of Android sourcebook. The paragraph about Starlight Crusade isn't very long, but pretty informative. And uh, thanks for your kind words. Maybe I'll post more of these, if people find it interesting. — H0tl1ne 16 Nov 2016
The meat damage might ALSO be partly a function of hiding in the crowd: I doubt the booth would stop a missile to the face, but the prospect of having to blow up the sanctuary might. — LordRandomness 16 Nov 2016
Perhaps you are right, but why would you lose your grip then? — H0tl1ne 17 Nov 2016
From the pack announcement article, I assumed the second ability was meant to represent the costs of joining the cult in exchange for their protection. — whirrun 17 Nov 2016
So you join the cult and trash the card - now that you are an initiate, all the protection they offered you is suddenly gone. Doesn't stick IMHO. — H0tl1ne 17 Nov 2016
Well, I mentioned PARTLY. I'm assuming you use the booth as in your description. As for why the card doesn't protect you unless you trash your grip, presumably they can just wait for you to leave and then blow you up unless you're spending like 12 hours in there or something. That or it's as whirrun says and you lose their protection because they had to shield you from a bunch of meat damage... — LordRandomness 17 Nov 2016
6

Even with all of the resource hate, this is the real sleeper hit of this pack. Instant speed damage prevention is great. Because of the tag removal each turn, the only way you are getting killed by meat damage is a highly telegraphed power shutdown or 24/7 combo. I've been seeing long forgotten cards like power tap and compromised employee being used with this card. I've tried it comboed with DLR and John Masanori to mill three cards and then clear the tag at the end of your turn so there is no need for the fall guys, wireless net pavilions, and the rest of the DLR package. The card has so much potential and it was really overlooked when it was first spoiled.

If we look at the first paragraph alone, this card looks pretty cool. It's a clickless way to get rid of tags, which is great, and it will probably cost you a credit less than usual to boot. Link enhances this effect, making it so the corp not only has to pay to land the tag, but pay again to make it stick. Great for dealing with that horrible scourge that is Hard-Hitting News. Or clearing an Account Siphon tag for cheap. Or if you really want to get wacky, have this and one Joshua B. out, clearing Joshua's tag with this effect (since both fire at the end of turn and you can therefore choose the order of resolution).

Now to that second paragraph. Not the most attractive way to avoid meat damage, obviously. You not only trash the resource, but your hand as well, so you've lost one click, two creds, and however many cards you have in hand. Still, when it's a choice between that fiery death, which are you going to choose?

Overall, a really strong card. The first effect is good by itself, and allows for some wacky combo decks I'm sure we'll all love and loathe in the future. The second is dreadfully inefficient at worst and a temporary lifeline at best, but by god, is it good for stopping that horribly pervasive card. Citadel Sanctuary will definitely earn a spot in many future decks because of that alone.

EDIT: I don't think there's an official ruling yet (if so please feel free to include it and correct me, I'd hate to be giving false information), but some points brought up by others make me now unsure that this card and Joshua B. synergize as I've claimed they would. If the two don't work, I'd still say the card is amazing, it's just lost some potential.

(Intervention era)
Gerrark 183
Is that synergy with Joshua B. confirmed? As I read the text, if you end your turn with no other tags than what Joshua would give you, the condition of Citadel is unfulfilled when the "end of turn" effects are triggered. Thus, only Joshua will resolve, leaving you tagged. — Krams 10 Nov 2016
"When your turn ends" would seem to be a conditional trigger happening before "end of turn" triggers. — GrantZilla1979 10 Nov 2016
According to the timing structure of a turn in FAQ 3.1, "End of Turn" and "When your turn ends" triggers occur simultaneously. Therefore, Citadel Sanctuary will NOT trigger if you have no tags before the end of your turn. — umchoyka 17 Nov 2016
If "End of Turn" and "When your turn ends" triggers occur simultaneously, doesn't that mean that you choose the order they happen in? Thus you could choose to take the tag first, then trigger the check for tags. — Basoon 25 Nov 2016
@Basoon, my reading is that when "turn ends," you look at all of the cards for satisfied trigger conditions, then evaluate them in the order of your choosing. So, when the "turn ends" hits, Joshua B gets queued up, but Citadel doesn't (since you are not yet tagged). You then resolve all of the simultaneous effects, but don't go back to re-evaluate the "end of turn" with any effects which have happened so far. This is the same principle established by the courts in the case of "Supplier v. Aesop's Pawn Shop" (which is in the Supplier's entry in the current FAQ, 3.1.2) — internet_potato 5 Dec 2016
0

My review has been removed. I've reasoned it very likely doesn't create an infinite loop when combo'd with Paparazzi. Too bad. Would've been fun. How it likely functions, is that it triggers once, "clears the tag" if the trace fails, Paparazzi tags again, then the turn ends. Shame.