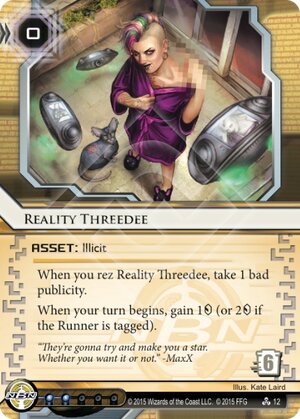 When your turn begins, gain 1credit (or 2credit if the Runner is tagged).

"They're gonna try and make you a star. Whether you want it or not." -MaxX
Illustrated by Kate Laird
Links: Decklists | ANCUR

I'm currently running this card out of GRNDL: Power Unleashed, and I've got to say it's way more powerful than I thought it would be.

The Perks
• Trash cost is a whopping $6, so even Whizzard: Master Gamer will hesitate to break it
• Trickles in at least $1 per turn, and double that with proper support

The Weaknesses
• Provides bad pub, which is always risky because it helps the runner ruin your plans

How to Use It
What this does is punish runners who don't want to run. In an age of Nexus Kate, there's a lot of games starting with what amounts to solitaire for the first 10 turns. That's where cards like this shine, because the runner must average at least 1 run per turn to come out even against this card (and they must average 2 runs per turn to do the same if you're keeping them tagged). Most runners can't sustain that... especially if you're running a bunch of dangerous bad pub ice in your suite.

Combine this with some solid taxing ice that can easily outscale bad pub (looking at you, Ireress and Swarm) and you've got yourself some actual economy. And, of course, you could always package this with Elizabeth Mills or similar to undo the bad pub if you don't want to go all-in on that strategy.

(Data and Destiny era)
KitsuAeryn 293
I don't think Whizzard will hesitate to trash this, cause he will have to pay at most $2 from his pocket, other part being paid by his ID and BP this card gives you. Otherwise, it's cost is quite prohibitive, unless runner packs Imp or Demorun. Pair this with Broadcast Square for lulz. — Shieldwall 14 Jan 2016
1

Reality Threedee is a really interesting way of tag punishment. Obviously you try to rez this card only if the runner is tagged and you won't include it at all if you're not trying to land at least some tags. This card is a 0 to rez/5 to trash PAD Campaign giving you a bad pub for other runs, which seems like a bad idea. However if you roll back far in your binder to the second cycle you will find a candidate that might be the solution:

The Broadcast Square. So the bad pub can be mitigated and a 0 to rez PAD that is harder to trash seems actually rather nice. The card has always been on the fringe of being useful, but dismissed with "...but how would you ever get bad pub in NBN?". As another addition Muckraker has been around for a long time helping you to land tags easily, paid by Threedee and the square. Also you might consider playing Grim in NBN, catching your opponent off guard. What I imagine is a deck that goes the Psycho-route of tag-storm for huge Beales and two-click Astros.

So what's the downside? Sadly, there are actually multiple. For one this strategy lacks an appropriate NBN ID. The really efficient tag-storm decks like SYNC don't need the asset drip economy and have no room to spare for Grim or the Raker. Other identities sadly lack the power to make tags stick. Spamming the runner with Ravens and Gutenbergs works, but neither do those synergize the cards mentioned above nor do they provide you a benefit in the late game if the runner chooses to go tag-me. Another problem for the late-game-NBN is the weak ice and the small-agenda suite. There are no useful late game agendas in the NBN pool, so you will play more and smaller agendas, increasing the agenda density.

Does that mean that all hope is lost? Not quite. As NBN is the fastest of all corp factions your ice is usually nothing more than a gear check and you have Tollbooth as an actual tax. So one or two bad pub actually don't hurt so badly. Since you want to finish the game fast the runner won't gain to many credits from this. So if you are running PAD Campaigns and there is a good chance that the runner gets some tags you might try to switch one or two campaigns with Reality Threedee. I'm looking at you NEH! Even you can have a late-game, that is, if you can let go of those NAPD Contracts...

(Data and Destiny era)
Capstone 40
Bad pub is terrible in NEH cause it makes your assets so much easier to trash. Expose might be a consider as well. — StashAugustine 6 Nov 2015
I'm currently playing the heavy bad pub broadcast square deck out of making news. My build doesn't seem quite there at the moment, but it is crazy the kind of value you can get (the deck also runs improved tracers, ice like checkpoint and shinobi, and rutherford grid, which really combos with the square). The biggest weakness is actually the inconsistency in finding the square, and putting together a good agenda suite that won't bleed out early. — whirrun 6 Nov 2015