The first time you create a server each turn, draw 1 card. 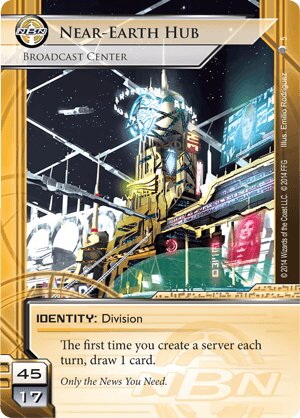 Making News, TWIY and Haarpsichord all have their merits but it's hard to compete with the speed, consistency and flexibility that NEH offers. The new NBN IDs in Data and Destiny look really interesting, but I think it's a fair guess that NEH will still be the king through the next cycles unless the conventional fast advance and Scorched builds get nerfed hard.

(The Universe of Tomorrow era)
MC729 25
no idea how this id got printed with 17 influence ... — gulden 8 Sep 2015
The first point is a bit overstated. The deck needs to play wide with assets in order to get use out of the Id ability. — Ber 8 Sep 2015
Not sure why this id has 17 influence either. NBN has the 3 best agendas: AstroScript, Breaking News, and Explode-a-palooza. NBN has Jackson, so they don't have to spend 3 influence on him. NBN has the best upgrade in the game, namely SanSan City Grid. Even with the MWL, NBN has no business having the highest influence. Discounting Custom Biotics which has a huge restriction, Titan Transitional is the only other ID with 17 influence. And now there is going to be another NBN id with 17 influence! Doesn't make sense to me. — quailman2101 13 Mar 2016