Use these credits to trash cards.

"Running is the ultimate game, and I get to make all the rules."
Anarch • Matt Zeilinger • What Lies Ahead 1
All sets:
Links: Decklists | ANCUR 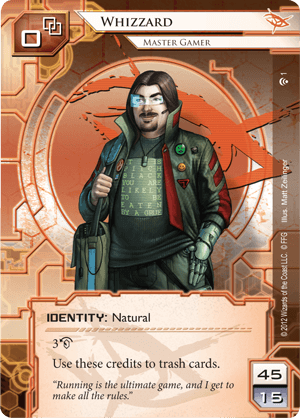 I am of the opinion that Whizzard is one of the most underrated Runner Identities going.

His basic stats are standard, 45/15 and no link. However, I have encountered several people who say that his runner ability isn't good because some decks do not run trashables. To me, this is akin to people saying plascrete is bad because not all decks run Scorched Earth. This is true, but misleading. Plascrete is common because whilst it isn't universally useful, when it is useable it will save your life.

Whizzard's ability might not always be of immediate use, but when it is, it will frequently win games for you.

I do not mean this as hyperbole. There are extremely few decks that do not run any assets or upgrades (CI being the only one that leaps to mind) and several strong archetypes (RP, NEH, etc.) that run several very powerful examples. Sundew, MHC, Jackson, Adonis... all become free to trash. PAD costs one. SanSan and Eve cost two. The runner cannot afford to leave them undefended when it is so easy for you to trash them. (well, except Jackson in certain circumstances).

This can give you a significant advantage in the economy game that is at the heart of netrunner.

The other, less obvious advantage is that his abilities do not tie him to a particular deck build. Noise, for example, is always going to be virus bombing; Ken will focus on events; Sillhouette on exploiting expose... Whizzard can run almost any deck archetype you can find the cards for, as most have no effect in any way (positive or negative) upon his ability. In that regard he is somewhat like Kate or Reina, in that the ability will be almost as helpful in any deck you make. (Although Kate's and Reina's will trigger in every game).

(All That Remains era)
Jashay 696
Let's not forget Dirigents : <a href="/en/card/03010">Director Haas</a> only costs you 2 Credits to get 2 Agenda Points, <a href="/en/card/05008">Chairman Hiro</a> 3 Credits and <a href="/en/card/07011">The Board</a> 4 Credits. Corps usually exploit their high Trash costs, but <a href="/en/card/02001">Whizzard</a> can reset this advantage because of his Ability. — Noloic 15 Jun 2015
I feel him to be one of the strongest IDs in the game. Against some decks, the game is over before it begins. Trashing all the corps PADS and the like for practically nothing means that the corp is broke and can't defend itself. Run into Jackson, no problem; SanSan, no too big an issue. Certainly against some decks, his ability won't be as handy as against others but it will still probably be used. I personally can't wait for him to be cycled out as he makes some deck archetypes all but unplayable. There are cards like scrubber that you can make room for to help with trashing. — quailman2101 1 Jan 2016
7

The greatest lie in Netrunner.

Whizzard has a cybernetic left arm, yet his subtype is Natural instead of Cyborg.

You deserved everything you got, you fraud. May you and your recurring credits never plague our assets again.

(Escalation era)
pang4 801
Could be something like the old Power Glove, probably used in this strategic game with robots that Whizz used to play. Check out the leaflet in What Lies Ahead. — H0tl1ne 20 Oct 2016
3

I've found Whizzard to be fantastic in aggressive econ-denial decks. Though less consistent than Reina Roja: Freedom Fighter, he is invaluable at trashing those pesky econ assets that allow the Corp to withstand Account Siphon or Vamp barrages.

-Gravedigger: You won't be shying away from trashing assets/upgrades because of a lack of credits.

-Multi-access: Same as above, you never need to think twice about trashing assets/upgrades while digging for other stuff (it's usually free!)

-Eater: Preventing card access prevents you from trashing things (that are installed, at least). I still run him in Eater decks though, since assets are often left undefended (in horizontal decks like NEH specifically, or Jackson Howard in general). And if you ever plan on busting into a scoring remote using other means, Whizzard will come into play again.