Place 1 agenda counter on AstroScript Pilot Program when you score it.

Hosted agenda counter: Place 1 advancement token on a card that can be advanced. 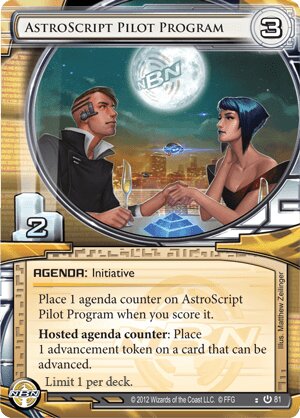 On paper this effect looks fine - you get a one-shot effect to not have to spend the normal cost it would take to advance your next agenda or trap. But when I put together a deck's economy, I'm looking for a better return than that. Hedge fund gives you 4 credits; this card only saves 1 credit and 1 click, and you had to spend your whole last turn getting it scored anyway.

Furthermore this agenda doesn't protect itself, is only worth a meagre 2 points, and the mind-games it lets you play by using the counter mid-run are fun in casual games but not quite competitive. I want my agendas to provide unique effects that you can't get with your ice and economy slots. For example private security force lets you kill the runner and project ares blows up the runner's rig. Compared to that, helping you advance your next agenda is pretty marginal.

Overall a C- card. Hopefully they release something later to combo with it.

(Up and Over era)
bblum 4237
You're a smart guy, clearly picked up some flashy tricks, but you made one crucial mistake. You forgot about the essence of the game. It's about the Cones. — CapAp 27 Feb 2015
Are you serious? either way very funny comment — pcastaneda 9 Mar 2015
Ha, love it. The joke that is, I wholeheartedly disagree with the original comment. — quailman2101 18 Jun 2015
14

I don't really know if you've actually played hardcore Astrobiotics or general NEH shenanigans, but AstroScript, in my opinion, is the single most overpowered card in the game.

By itself, yes, it's not as good as other agendas in terms of ability on its own. But when you take into account the cards that NBN has at its disposal in faction, it becomes more than a little ridiculous.

For one thing, there's the "Astrotrain." Score just one of these, and you're set for scoring the second two. Once you've scored the third one, all you need is to Fast Track for Breaking News and you've won the game. This definitely relies on card draws (getting the right ice to keep them out of the first server, having the right agendas, etc) but considering how much draw power NBN also has in faction (Jackson Howard, Anonymous Tip, Near-Earth Hub: Broadcast Center's ability) it's not so far-fetched to imagine this happening.

When facing an NBN deck, my strategy is usually to run aggressive and early. The problem with this is that if I'm facing a Psycho-Midseasons or Tag & Bag, I'm going to pay dearly for those early runs because they'll probably leave me broke, while the corp is gonna bounce back pretty fast due to the cheap rez cost of the ICE they're gonna play. With Sweeps Week requiring only 1 credit to play, you don't even need to splash Beanstalk Royalties. Just go for Green Level Clearance or Blue Level Clearance and get some MORE draw power.

In an ideal meta, PSF and Ares would do some real damage. But 2/4 agendas simply aren't suited for Fast Advanced (which is still dominating the meta), unless you're talking about something taxing like NAPD Contract. And if you have to score it, SanSan City Grid and your handy astro token will get the job done.

If they ever come out with a ban/limited list for Netrunner, I want this to be the first card on it. Limit it to 2, maybe even 1, per deck. Then we might see some more interesting NBN agendas being played like Market Research and Character Assassination. Until then, the Astrotrain will keep on chugging.

(Up and Over era)
Shishu 409
I concur, I too feel it to be the most overpowered card in the game. If the corp scores one early, which isn't all that hard, then there is a good chance the runner has already lost. I feel it should be changed to a 2/4 or a 1/3 or a limit one per deck card. It would still be an amazing card but not ridiculous. — quailman2101 18 Jun 2015
I am happy that there is finally a card that can potentially nullify the huge advantage that astro gives the corp. That card being Turntable. I haven't tried it out yet though. — quailman2101 19 Jun 2015
They finally did something about this card with the new NAPD Most Wanted List. — quailman2101 31 Dec 2015
...it wasn't near enough though. — quailman2101 14 Feb 2016
Breaking News: On 18th July 2016, the Astro Train derailed and was destroyed indefinitely. — Tacitus 12 Jul 2016
A spokesman revealed there was an increase in Butthurt by many, whilst others seemed unaffected. — DarkHorse 19 Jul 2016
13

(Core Set perspective! (Kind of. Might need to stop saying that soon.))

And now we come to this. The card I've been dreading, but would need to address eventually. This agenda is the reason 3/2s are viewed with such fear. The cause of innumerable 6 points being scored off the board. It's fast, it's vicious and if not stopped in its tracks, will squish you right under its wheels. It makes perfect sense use it(them) in almost every NBN deck as well. Why risk your precious points when you can score one at a discount with a SanSan City Grid and then cascade the scoring tokens on the other two? Why indeed? That is the sheer power of the 'Astro Train'. You've almost won and you've never even been in danger.

It puts the fear of News in everyone. It causes runners to howl at the moon in rage. Yes, with three of these in your deck, you will never agai-wait what's that?...New rules?...How new?...How ruley, exactly? ...

Erm, just a second everybody!

swift excusing of oneself

Well, hello again. Sorry to have kept you waiting. So, yes, as I was totally saying before, this card is decent 3/2 with the added bonus of giving a little cheeky kick to your next project, hopefully whatever key agenda your deck is designed around. Unlike Merger, it won't punish you for failing to protect it, and if you can score it then you get a little bonus.

It's unlikely to win you the game by itself or anything absurd like that, but if you can find the one copy you're allowed, it can be a good thing to include.

I suppose it also makes sense thematically that you'd only have one, I mean, how many times do you really need to tattoo the moon? Now let's all lower our PADs and share in a moment of silence (sad or otherwise) for the train's soon to be last journey to Victory Station, SanSan City.

I think the joke went over your head.

Unless...unless you were also telling a joke!

Aargh, hoisted by my own petard!!

On a serious note though, a "ban list" seems less likely than adding more "rubber bullets" like The Source and Chakana. Aggro (Fast Advance) decks have their turn in the sun in lots of CCGs, and there are elegant ways to deal with that without wholesale banning.

(Up and Over era)
Yubinshan 3