The Professor: Keeper of Knowledge

The first copy of each program in this deck does not count against your influence limit. 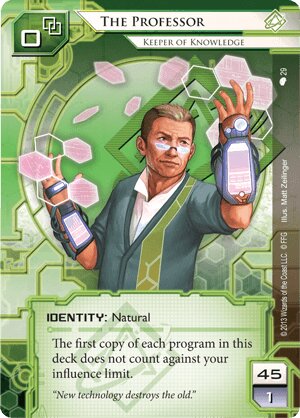 The Professor is (writing just before the release of All That Remains) widely considered one of the worst IDs.

His ability, like that of Custom Biotics, does not impact gameplay at all, entirely dictating deck construction. (This is different from identities like Andromeda, GRNDL and NEXT Design, which have abilities boosting the start of game, and are inactive for the rest of the game. Notably, Andy is the only one of these three not to have a downside for this benefit.)

He has the lowest influence in the game, at 1, but is the most splash-friendly ID there is: Professor decks generally have more than a third of their deck from opposing factions.

His ability, playing one of any program ignoring influence, allows for a deck featuring three SMCs, along with other shaper tutors and recursion to support the biggest, splashiest programs from out of faction, like Sneakdoor Beta, Keyhole, Medium, Nerve Agent, Imp, or high-inf icebreaking programs like Faerie, D4v1d, Morning Star, Garrote. (All this while not preventing use of low-inf programs like Femme Fatale, Parasite, et al.: you get to have a silver bullet effect running one-of situational cards like Copycat, maybe Crescentus, Deus X)

At present, most Professor decks end up looking a bit like Anarch GoodStuff with Shaper deck manipulation, plus Faerie and Sneakdoor. This is largely to do with the lack of good or high-inf Criminal programs to give more advantage to playing him: Sneakdoor, Faerie, Garotte and Savoir-faire are the only criminal programs with inf >2.

His art shows the hexagons which frame all program cards. This (along with the ability text) is a very unsubtle hint: the Prof is all about the programs. Build a deck which supports and utilises good programs, has memory, econ and speed.

At present, most Prof decks seem to be built around ProCon or Freelance Coding Contract. If you want to go for the latter, it's not too hard to have more than half your deck be programs. This is very fun.

I am ... anomolous in believing the prof is good. But, you know, they say Account Siphon's the strongest card in the game, that it's best when the Corp doesn't see it coming, so the Runner who the Corp will least suspect of running Account Siphon (by virtue of not being allowed it alongside a few other cards) must be the best, right?

The professor, as an identity, will only get stronger as more programs are released. Upcoming cards like "Rex", and non-NRDB spoilers we've seen should continue to give Professors more program options make his ability work.

Three important questions to keep in mind for building your prof deck:

(Up and Over era)
JAK 367
I think the biggest question you have to ask is: what if the corp simply doesn't ICE HQ? Any other ID has the threat of Siphon. The Professor has what, one Lamprey? — lmm 14 Apr 2015
Stick a Nerve Agent and Pheremones onto a Djinn (or not) and they'll be icing HQ instantly, especially when they see Pheremones paying for your Workshop fees each turn. — LynxMegaCorp 14 Apr 2015
Or just Imp their hand away with Nerve Agent. — JAK 14 May 2015
Code Siphon :) — arcv2 27 Jul 2015
Excellent review. You mention his ability text and his art as unsubtle hints, but neglected to mention his flavor text. Do not forget that a professor is one who professes, and The Professor declares: "New technology destroys the old." This, too, is a hint about how to play him. (Aesop's anyone?) — Drugs 19 Nov 2015
22

"New metas destroy the old"
How the winds of change blow.

Prior to 2016; our humble Professor was considered a joke card.
His text box ability only applies to deckbuilding: whilst he can include nearly any number of programs in his deck, anything out-of-faction could only be a one-of making pulling anything you need up unreliable unless you used SMC or Clone Chip. Anything that isn't a program is restricted to a single copy of 1 influence, and that is if you didn't use it to import an extra copy of a single influence program.

Why would any discerning shaper player use him?
Why restrict yourself to singles of good programs out of faction, when you could have multiple copies of the strongest of those programs and be able to tutor and recur them just as effectively?
What can this guy do that no one else can? - What's his hook?

Those questions now have an answer.

For the unininitated, on Thursday, 31st December 2015, at approximately 18:00 GMT: Damon Stone, the new Lead Game Designer, made an inaugural change to the ruleset for tournament play to curb the use of certain overplayed cards. For better or worse, those changes are here, those changes are the NAPD Most Wanted List.

So... What the heck does this have to do with our neighbourhood Mr. Rogers look-a-like?

The mechanics of the NAPD Most Wanted List (i'll simply refer to as 'The List') are quite simple.

Disregarding for now what is actually on The List, this has given our Professor a new 'hook'. Our Professor does not give a single hoot about this mechanic. He flat-out ignores it.

His influence limit is already 1, so it cannot be reduced any further by Listed cards.
He ignores influence on any out of faction programs, so his influence total being 1 does not matter in the same way as for other runners. meaning... He, and he alone can play unlimited numbers of cards on The List, he can play Listed cards in such numbers that no sane player would include in any other ID: most notably Listed neutral and shaper cards.

So sure, he'll never be able to use Lucky Find, or The Source, nor will he ever afford more than a single copy of any non-program that is out of faction. But do you really need them?

When you can delve into the NAPD's evidence locker and help yourself to as many Prepaid VoicePADs, Clone Chips and include such illicit digital gems as Parasite, Yog.0 and Cerberus "Lady" H1 in your collection, how much do you really care what is going on outside the walls of your University?

"Oh these little things, Officer? I'm just using them for 'research' purposes only. I have all the paperwork signed off right here"

(Data and Destiny era)
Theyos 69
I'm going to post this here since its the first review in regards to the new changes coming in February and I hope everyone sees it. Can we please, PLEASE refrain from going crazy on a bunch of new card reviews until after the changes take effect and we actually experience the new meta first hand? I can see NetrunnerDB turning into a madhouse of new reviews because of this and I think it would be mostly unhelpful to anyone until we actually know what its going to be like. That's why reviews on unreleased packs are prohibited. Just my two cents. — WayneMcPain 1 Jan 2016
I see your point and I agree with you, I may have got carried away with the positives and originally wanted to provide a more balanced viewpoint, ending with a pro/con summary and an 'only time will tell' caveat. I mainly wanted to explain to new players going forwards what the Professor's (essentially new) text-box ability did, and once the site allows me to edit my review I intend to refine it. If this gets enough negative feedback I'll take it down, chalk this up to being pumped for the new changes. — Theyos 1 Jan 2016
Definitely not trying to come across aggressively and I see your point as well. I just want to make sure things don't go haywire up in here. :) Sorry if it came across poorly. You had good things to say in your review. — WayneMcPain 1 Jan 2016
And then we spend his influence on rebirth to turn him into Kate. New meta established. PPVP Kate always finds a way. — forktines 1 Jan 2016
Honestly, this review was way more interesting/amusing/engaging because it was written so positively and excitedly. I think having it followed by Wayne's first comment is enough of a disclaimer, and I quite like it as-is. — LordRandomness 7 Jan 2016
Yup, that one influence is so very clearly marked for Rebirth now. PPvP Kate or Hayley or CT or Kit or Jesminder or Nasir or Exile! Lose literally nothing! — EnderA 12 Feb 2016
Oh. — LordRandomness 4 May 2016
Oh dear. That applies to Andromeda as well. — LordRandomness 4 May 2016
10

The time for rotation has come, and with that, it's time to say goodbye old friend.

The Professor is a teacher. He taught me a great many things about Netrunner.

The Professor taught me the true extent of what a Shaper toolbox can do, by pushing the limits of what you could put in it. He taught me the limitations and strengths of Shaper in general. He taught me how to tune decks like no runner before him, thanks to his unique influence setup. He allows you infinite options for exploring new ideas, even as he forces you to evaluate every card you put in his curiculum.

I hope The Professor won't fall into the wastebasket of history. Maybe NISEI will let him enter the Hacker Hall of Fame, or give him a retrain in some fashion. Maybe he will find a place among the juggernauts of Eternal, though I doubt it. Or maybe he will simply grace the kitchen tables of fools like me who will struggle to let him go.

Rotation may take you out of Standard, but the lessons you taught me will not.

(Kala Ghoda era)
pang4 831
I am interested in trying him out again, especially post MWL. Exile is the worst ID in my opinion though. Even if you build a deck specifically for him with all the heap installs (and there aren't all that many), Kate is a better choice every time. — quailman2101 16 Feb 2016
Try it out. It's amazing once you get to know how to play with him. — pang4 17 Feb 2016
I have been playing professor before the MWL and i have found him very useful and an amazing Toolbox style of deck. With so many ways to tutor for other programs at your disposal having the right programs can make any game very one sided. — wizzogomex11 1 Mar 2016
3

With many changes in so little time (rotation, revised core set, MWL 2.0), the game unfolds to a whole new set of possibilities that yet have to be charted individually.

Among them, it must be highlighted that with MWL 2.0, the concept of universal influence introduced with MWL 1.2 is gone and the latter was a showstopper for the professor, given that the then restricted cards counted among your deck's influence, insteading of reducing your ID's influence to minimum 1.

(Crimson Dust era)
Him 272
Indeed. Every Professor deck always had 3 Clone Chips, then MWL 1.2 came and the prof was gone completely. Now he'll yet again be able to slot 3 Clone Chips, just not alongside MOpus. Professor Jank is back. — Krams 28 Sep 2017
2

Nice review but this card is flawed so much, you should use it as divider in the box.

No splashed events/hardware/resources more expensive than one ergo: you play the game with your pants down, mostly shaper cards and that very slowly.

Every other ID is better and that's not gonna change because of a new breaker suite or what not.

(All That Remains era)
Crashdown 3
Ehhh.... — AdelaH 2 Sep 2015
Kinda narrow-minded of you there. As has been stated, The Professor can be all about the earlygame if you build him to it. Make an Aesop-resource economy, hammer servers with Medium and cheap, one-off breakers and go wild ^^ — pang4 16 Apr 2016