You cannot include Jinteki cards in this deck.

The Once and Future Android.
Haas-Bioroid • Emilio Rodriguez • Creation and Control 2
All sets:
Links: Decklists | ANCUR 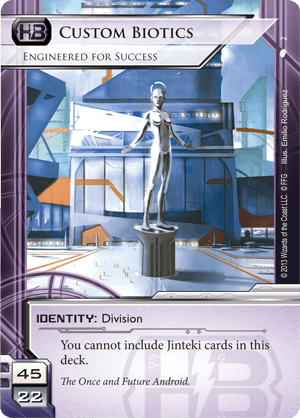 I think Custom Biotics is the second worst corp ID.

The problem with Custom Biotics is that the 'extra' influence doesn't really make up for what is otherwise a blank ID. The standard comparison for an HB identity is ETF, which can very reliably provide 1 credit on most corp turns and the occasional bonus credit on the runner's turn. Does 7 additional influence make up 1 credit per turn? It is a very hard sell at best, since those credits are very important early when the corp is building servers and rezzing a few early ICE on centrals, every credit counts.

A more balanced comparison may be NEXT Design: Guarding the Net. Both Custom Biotics and NEXT Design are essentially blank ID's once the game is underway; neither will be bothered by Employee Strike. But even here, NEXT's early start of 2 or 3 installed ICE and corresponding card draws puts the corp as much as 2 full turns ahead at the start of the match. The corp can focus turn 1 on econ development to develop a credit lead while its servers are already protected. Custom Biotics's 10 influence advantage should look impressive here, but again, with no early game advantage to leverage, the corp struggles against even modest early pressure and econ denial.

I won't compare Custom Biotics to Cerebral Imaging: Infinite Frontiers because I think CI is actually the only ID that is worse than Custom Biotics. My theory is the two worst corp IDs were both placed into HB to somehow make up for how very strong ETF is.

If Custom Biotics had even a modest bioroid-themed advantage, then maybe it would have a chance, but giving up Caprice Nisei, the biggest influence hog in HB glacier decks, for a little extra influence seems like a bad deal. Maybe with Data and Destiny out someone can make an NBN-heavy HB deck using some clever cards like Early Premiere and Product Placement to build a powerful HB glacier deck in this ID, but I don't see this ID ever elevating above the mid-tier jank level of play.

(Data and Destiny era)
bubbathegoat 588
"My theory is the two worst corp IDs were both placed into HB to somehow make up for how very strong ETF is." Actually, Lukus confirmed that they were overly cautious about the power levels on the earliest sets including Creation & Control where both these IDs are from and the also sad NEXT Design. — BoomFrog 18 Mar 2016
"I won't compare Custom Biotics to Cerebral Imaging: Infinite Frontiers because I think CI is actually the only ID that is worse than Custom Biotics." Boooooy how times have changed... — BlackCherries 5 Mar 2018
4

Certainly going to have no trouble coming up with economy & lots of Ice!

What do you have to lose by not including Jinteki cards in your HB deck? Snare! is great for RnD and HQ protection and setting up a surprise kill. Mushin No Shin can be an important fast advance card and a good bluff alongside some Cerebral Overwriter. The biggest loss here is Caprice Nisei though, and that alone might be enough to discourage the use of Custom Biotics: Engineered for Success.

So without access to these cards, what are you left with? You can still threaten the tried and true SEA Source/Midseason Replacements/Scorched Earth combo. Fast Advance play is definitely an option as you can slot in 3 copies of SanSan City Grid and still have 13 influence to spare. You can still make a great Glacier HB (although not having Caprice here will definitely hurt.)

There are definitely a lot of options that Custom Biotics: Engineered for Success opens up with so much influence to spare. And the loss of Jinteki cards isn't that impactful for the most part. So why doesn't it see play?

Simple: Why play CB when you can get the pure economic advantage inherent in Haas-Bioroid: Engineering the Future? And that's what it usually comes down to with HB. EtF still have the best built in econ in the game, and with added access to Caprice Nisei, that is why CB will almost always remain in the binder.

I do not think the pro 22 influent value overcomes the con of not to get the Jinteki card ever. There are several assets from Jinteki that I like to use, such as Project Junebug. Do not forget that it means no Snare! as well. I don't think this ID will be a viable option in competitive play. There are a lot of good cards in the Jinteki's card pool and it would be a great disadvantage not to include them in the deck.

(Crimson Dust era)
celebesario 2
And even HB decks without any single Jinteki card usually work better in any other ID that has an actual ability. Plus, if you want to incluse that many cards from the two other factions you often end up with a game plan that works better simply playing one of these other factions. — Krams 22 Sep 2017