You cannot use Savoir-faire more than once each turn.

2credit: Install a program from your grip, paying the install cost.

"Predictive algorithms that fetch you the program you need before you even know you need it. My second favorite lady." -Gabriel Santiago
Criminal • RC Torres • Double Time 105
All sets:
Links: Decklists | ANCUR 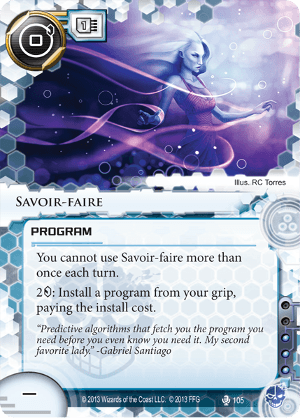 Savoir-Faire is French for "expertise." She may only be Gabriel Santiago's second-favorite lady, but Haley Kaplan (and to a lesser extent Geist and Nasir) likes her rather better! She is a tempo accelerator for any deck that installs often. If you have 10+ cheap programs (especially trashable programs and cloud breakers) in your deck and want to run sooner and more often, the lady in blue may be right for you. Her secondary benefits include mid-run installs, off-turn installs, and information concealment, but if you only want to install stuff during runs or out of turn, SMC and Personal Workshop are better cards.

Likely runners include Geist or Kahn with a full set of B&E breakers, Noise with a ton of cheap viruses, or Haley running Chameleons or dropping a truckload of cheap programs (like SMC, Hyperdriver, Zu.13, etc). Kate and Valencia might initially seem like good choices because of their built-in cost reduction, but those IDs usually have little need for program spam.

Because Savoir Faire works well with many out-of-faction cards, has a high influence cost, and addresses a niche need from an unusual deck type, she's not a casual include for your deck. You'll only use her in highly specific decks that are built to exploit program spamming.

If you are using her in Anarch or Shaper, you probably want to mitigate costs. Cards that make her more user-friendly include Technical Writer (0-influence and stackable, A+ choice), Scheherezade, Multithreader, and Corporate Scandal. Avoid B-Listers like Sahasrara, Net Celebrity, and Chatterjee University.

If you are using her in Criminal, you are probably running your way to wealth with Account Siphon/Desperado/Temujin Contract/Security Testing/Bank Job. When you earn 3++ credits per run, 2 creds to install is a good trade, and helps you draw more while still running often and maintaining pressure.

Now, let's talk about stuff that's fun to do with Savoir Faire!

You can machine-gun out programs just as fast as you can draw them.

Obviously you can (yawn) install an icebreaker. But the ideal install is the surprise game-changer. Cards that come to mind include Clot, Parasite, Hyperdriver, Crescentus, or Surfer. Panic-button cards like Deus X, Net Shield, and Sharpshooter are also good plays. You can hold these cards in hand, preserving your tempo and installing them only if you really need them.

Savoir Faire and an Autoscripter effectively grants you seven clicks per turn as long as you can keep installing. That's good until you run out of creds, programs, or mem.

The lady in blue can also buy you an extra run (and therefore an extra access) by clicklessly installing Equivocation, Medium, Nerve Agent, or Keyhole when you see an R&D vulnerability.

Delving into the Realm of Jank, the blue lady clicklessly reinstalls Golden or a program top-decked by Brahman. She offers quick recovery from Archangel and Hatchet Job. She enables quick recurring usage of a Chameleon rig. With Deep Red and Caissa programs, you can do fun, janky things installing and hosting Caissa programs in mid-run. You can stack Savoir Faire, Autoscripter, Rachel Beckman, Jak Sinclair, Doppelganger, and Beth Kilrain-Chang in a Haley deck and effectively take 13 clicks per turn. You can dust off cards like Disrupter, Copycat, and LLDS Energy Regulator. The cost-mitigation cards mentioned above are useful enablers of all such bad habits.

This is a cool card. I love the artwork. And I think it is very interesting. Its ability lets you install a program from your grip without spending a click but at the cost of 2 credits. This usually isn't that great of a trade. 2 credits is almost always worth more than one click. Of course we have our economy cards but many of them average out to less than 2 creds/click. If you have the money though, it can be very handy to save a click. Sometimes you just have to make a bunch of runs or click through bioroid ice, etc. Now, there are ways to lower the cost of Savoir-Faire such as Omni-Drive and Multithreader. When used in conjunction with one of these cards, her ability becomes much more playable. One great thing is that this ability can be used on the corps turn. This allows for a Clot install when its needed most. If you are playing as Kate "Mac" McCaffrey: Digital Tinker then the cost of installing the program is really only increased by 1 instead of 2. A major downside though is the influence cost.

-can install a program on the corps turn

-costly to use without support cards

I don't think I've ever used her because of the cons listed. However, I did come up with a pretty crazy combo a while back. Play as Hayley Kaplan: Universal Scholar, have Savoir-faire, Multithreader, Autoscripter, Sahasrara, and Scheherazade installed. Have Chameleon in hand. With this set up, you could install Chameleon (and another program if you have it) on the Scheherazade each turn for free. You would actually gain a click and a credit! Much too cumbersome to be playable probably, there are too many parts (though I haven't actually tried to do it). But it would be sweet!

(Data and Destiny era)
quailman2101 246
this is really just a criminal cheap imitation of SMC, the limitation of needing cards in hand is too restrictive to make it more useful though. — ryathal 17 Dec 2015
Autoscripter works just on your own turn so you wont get a free click, but to install something with Savoir-faire and London Library works. A Femme for free and a Chameleon as a bonus. — Crashdown 18 Dec 2015
I don't think you can combine this with London Library. — quailman2101 22 Dec 2015