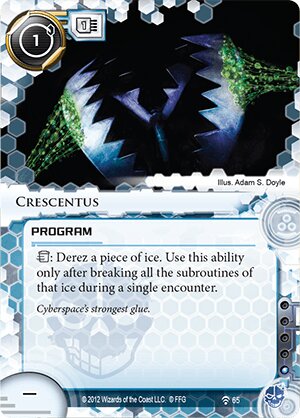 trash: Derez a piece of ice. Use this ability only after breaking all the subroutines of that ice during a single encounter.

A nice little card that can help for attrition war as well for temporarily opening servers.

That said, be aware that Corps tend to be rich these days, so it demands timing if used for opening servers, and must be seen more as a support card than key card for attrition.

Also notice that Criminals generally prefer Emergency Shutdown, since it fits well with aiming for HQ while Crescentus asks for , a tight resource for Crims.

That makes Crescentus not so played, but two Runners really love it :