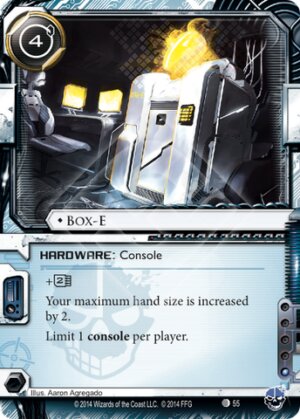 I've never yet seen Box-E in play. It seems fairly simple, if not simplistic a card - two pieces more in the grip, two more mem, no additional creds, no free tutors, no double-runs or forced rezzes. Booo-ring!

Unless you realize five plus two is seven. And seven is the number with a significant symbolic meaning. For instance, it holds the ultimate answer to the question why the current meta looks so much like ass.

As it quickly becomes clear, there is no place better suited to let you survive a direct personal ordnance assault than the inside of your boring white photocopier. No, let's say that again - this lets you survive A FREAKING ROCKET TO THE FACE!

What else is it good for?

In this uncertain, grim future of everybody out to slap a ton of tags onto your buttocks only to follow with a barrage of rockets, look no further for your console of choice. It's always been there. Silent, stoic and cuboid. Box-E, your warm and understanding friend for no matter what. It might not hold your hand, but it will comfort your heart nonetheless.

It's like an Aperture Science Companion Cube that actually does something.

Box-E is an efficient console, putting Cybersolutions Mem Chip and Public Sympathy into one card but only costing as much as a Cybersolutions. It also costs only one influence, making it a great import into other factions.

For Criminals, I expect most decks will skip this. Criminals often don't need that much memory, and other great consoles like Desperado. Doppelganger, and Logos already exist.

In Anarch, you might see it a bit. However, many builds will already be running Grimoire and will want to skip this. However, for decks that run less viruses, this could be a good option.

I think you'll primarily see this in Shaper. Shaper consoles are either expensive (Toolbox), more expensive (Monolith), work mostly in decks that rely on a single breaker (Dinosaurus), or mostly work in decks that only need one extra memory (Astrolabe). At only one influence and offering all the memory you could need plus light flatline protection, this should be seen in Shaper quite a lot.

(All That Remains era)
AwkwardPizza 62
4

I have always looked down on Box-E as one of the lesser consoles but recently have had a change of heart. I have often looked at some Criminal control decks that used a fair bit of MU on non Ice breakers and each time I had the problem of: "Criminal has little ways to boost MU, do I really want to spend influence to increase my MU"

Now it has dawned on me just how valuable this console is in Criminal. In a faction where you do not have any tools to give you a solid boost in MU that extra 2 is a big deal. Saving both on influence and cards that you need to draw. While Desperado is often the go to breaker in Ken and Fisk decks I can certainly see this used when you are using cards like Sneakdoor Beta, Imp, Nerve Agent, Lamprey and maybe even at a stretch Pheromones.

(Data and Destiny era)
Zail 12
I think its a worthy splash for anyone who wants MU and hand size in one package without using native tools. Shapers would at mininum need a CyberSolutions Mem Chip and Sympathy (6$, 2 clicks) or 2x Borrowed Satellite (6$, 2 clicks), whereas Anarchs would need Grimoire (which really should be used in virus decks for best effect) and Sympathy (or Origami, lol) which is 5$ and 2 clicks. Shapers also get Trade-In and Modded. Yay, stuff! Also, Adam has a superior console, and the other minis get their own great consoles. — LynxMegaCorp 8 Jan 2016
Why did I even put Borrowed Sat? — LynxMegaCorp 8 Jan 2016
The boost to hand size provides excellent passive protection against Sorch et al, as well! Not too shabby. — KitsuAeryn 8 Jan 2016
2

Box-E is an incredibly efficient and versatile Shaper console, with the only downside being that they painted it blue.

Box-E has decent MU upgrades, along with a free Public Sympathy tacked on, all for the low low cost of 4 credits and one influence. This card fills a very important niche in Anarch, comboing especially well with Duggar's and our favorite Anarch staple economy card: Stimhack. There are dedicated Anarch decks that would shine with the inclusion of Box-E, Stimhack, and a handful of Same Old Things.

Also all things said by AwkwardPizza are correct.

(All That Remains era)
Kronosdev 45
I have always looked down at Box-E as one of the lesser Criminal Consoles. However recently I have had a change of heart. — Zail 8 Jan 2016
Sorry, failure on the use of netrunnerdb posting functionality. However just as it can be useful in Anarch it can be just as useful when importing those Anarch tools. — Zail 8 Jan 2016