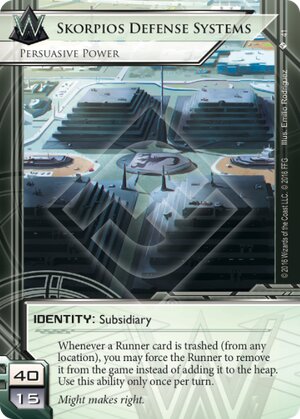 interrupt → Whenever 1 or more Runner cards would be trashed (from any location), set those cards aside instead of adding them to the heap. You can look at those cards. You may remove 1 of them from the game. Then, add all of those cards that are still set aside to the heap. Ignore this ability if you have already removed a card from the game with it this turn.

Might makes right.
Illustrated by Emilio Rodriguez
Decklists with this card

Runners, I fear for you. Be persuaded by its power or suffer the consequences. This identity will force the meta to adapt. Exactly how remains an open question but every deck design will have to at least consider the question, "How will I respond to Skorpios?"

Clearly one response is Employee Strike given that it is already a great answer to so many other questions. Frankly, I suspect that 3 becomes the minimum number of currents that Skorpios runs to counter this. Housekeeping and potentially Door to Door play well with their game plan. And 1 of each breaker builds become probably far too risky. Jack that up to 2 or even 3.

Without EStrike, a whole swath of runner cards and archetypes that thrive by trashing their own cards. (particularly if they take place on the runner's turn, enabling another Skorpios activation) are greatly disincentivized if not rendered outright useless.

Shapers will have to suck back a huge gulp of 'Nope': Scavenge, Self-modifying Code, Aesop's Pawnshop, Sharpshooter, Deus X. Removing from game also makes their recursion options considerably weaker later on, looking at you Levy AR Lab Access and Clone Chip. Film Critic in faction will help against Hunter Seeker at least and Sacrificial Construct may help keep your programs on the table longer.

Anarchs are perhaps getting unduly painful payback for Salsette Slums and Archives Interface: Frantic Coding becomes a buffet of options.

Probably Criminals hate Skorpios the least. They don't play much recursion so they've been living this life for a while.

For Skorpios Hunter Seeker seems like an obvious auto include, Power Shutdown will do work. I'm not even going into all the damage cards that can ruin your day. Apparently there are a few? I've heard ICE can trash things sometimes, so there's that as well. Corporate Troubleshooter and Marcus Batty help that happen.

Pay careful attention to the 'from any location' text. This really puts Runners in a tough spot. Sit back and watch some TV while we do some renovation on your deck. Hint, renovation means crippling.

I try to avoid prognostications of doom or yelling things like 'broken'. I still love you Netrunner. I will say this though, I have reservations about the power level of this card given how prevalent trashing mechanics are in the game.

(Terminal Directive Cards era)
FreqKing 249
Also I can't get the image of Hank Skorpio with a flamethrower out of my head when I see this card. And that's good. https://www.youtube.com/watch?v=Tnod9vtB4xA — FreqKing 28 Apr 2017
For a long time, Whizzard basically got an auto-win versus any asset spam deck. To respond to this (in my mind anyway) they released cards with ridiculously high trash costs (like Jeeves) and printed the worst card ever (FiHP). Now Whizzard has trouble keeping up with those annoying asset spam decks. I feel they should of just removed or errata'd Whizzard to compensate. But w/e, Whizzard is cycling out and soon I don't know what will happen. Now comes along Skorpios which basically gets an auto-win versus Maxx and Exile and against certain deck archetypes. I don't feel that it is a good idea to have ID's that by default completely ruin others. But I will say that it has to be hard to keep everything balanced when they are releasing a new datapack every month or so. I definitely love this game and feel that FFG is doing a good job in general. — quailman2101 28 Apr 2017
This ID hits recursion and event based based decks so hard and the fact that it triggers every time something is trashed is brutal. Besides employee strike, there aren't really any answers to this ID other than shifting deck design away from recursion to redundancy. It's pretty obvious that this ID will lead to some hideous rigshooter decks that will run multiple copies of housekeeping. — DGB123 28 Apr 2017
Just realised that it's once per turn so it's not quite as brutal as my first impression but with all the support cards for this ID it will be the ultimate rigshooter deck. — DGB123 29 Apr 2017
It's funny, Shapers both have the easiest and hardest match up against this deck. They are of course the recursion faction with the cards you mentioned, but on the other hand they can just run 3 Sacrifical Construct, or use Film Critic and laugh as Hunter Seeker becomes a dead card. — Cpt_nice 30 Apr 2017
Does this ability trigger if the runner discards a card ? — mouettte 1 Nov 2017