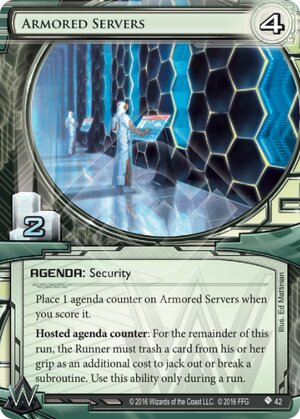 Place 1 agenda counter on Armored Servers when you score it.

Hosted agenda counter: For the remainder of this run, the Runner must trash a card from his or her grip as an additional cost to jack out or break a subroutine. Use this ability only during a run.

So, you're saying that if I have more subroutines than the runner has cards, they can't get in?

And that if they happen to come across an ice with a nasty face-check with a large number of subroutines, they will need to spend their hand to deal with it?

And that if they have no cards in hand they can't just jack out to get out?

Komainu is only 4 influence a piece, and with Mausolus,Cobra, and Prisec all being good cards that also happen to do damage, it's entirely possible to set up a kill server for the runner to fall into with this.

And if you are playing this in Titan Transnational, you get a free bonus counter, as well as influence to pay for a couple copies of Friends in High Places to help you get your ice the right way around.

And the only ways the runner could possibly survive this are:

Anyway, enough combo theorisation, the best comparison here is that it's the Weyland version of Nisei MK II, if popped at the start of a run on your scoring server, it's quite likely the runner won't be able to get in, but they can reasonably bounce off an ETR ice, and run again.

So, clearly, it's best if you pop it as the runner approaches an ice with a punishing face-check, as then they are forced to break it, paying the cards, pay the card to jack out, and then run again, at which point it might not be practical for them to run again.

But them running again is still quite feasible, so clearly, you need to make use of the 3-4 cards the runner will have spent on the first run to make it worth it, be it another counter from Titan, or a Snare!, or even just making use of the runner having used up another click, potentially leaving them tagged, and probably without the cards to survive a Scorched Earth.

This agenda seems entirely playable, though it does require some deck-building decisions to really make it worth it outside of Titan, I can see it getting played in Titan once Weyland's other problems compared to other factions are addressed.

(Terminal Directive Cards era)
Quarg 253
And when they FINALLY make it through your horrific FC3, DNA Trcker, etc. death server, nuke it with Self-Destruct! FiHP to do it all over again! — Handsome Jack 5 May 2017
The Komainu combo is fantastic and combos very well with Ben Musashi. They cant jack out and cant steal agendas because they will die, works great in titan but also doable in argus. — Echo_Chaser 13 Jun 2017
0

One thing i never see talked about with this card is using the token when the runner plays a high impact run event like account siphon. They won't just ETR and come back in because their event is wasted.