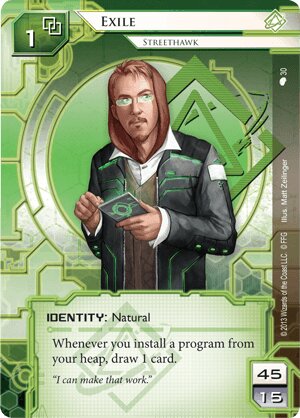 Whenever you install a program from your heap, draw 1 card.

"I can make that work."
Illustrated by Matt Zeilinger
Decklists with this card

Poor Exile. Poor, poor Exile. On the face of it, his ability is actually pretty decent--click compression is always nice, and drawing cards is nothing to sneeze at. Plus, installing programs from the heap is a powerful Shaper tool that you'll want to make use of anyways--just look at Clone Chip!

That is, unfortunately, where Exile's problems start. Installing programs from the heap is strong. Which means that there's not actually that many ways to do it: in-faction you have Clone Chip, Test Run, and Exile's own signature card, Scavenge. They're all good, but because that's all there is, your ability reads: "Over the course of the game, draw maybe nine cards". Still nice, but that's just not enough for you to want to pick him over any other Shaper. So we're going to have to go deeper.

Out of faction, we find an astounding two cards that install programs from the heap: Retrieval Run, which is two influence and really awkwards besides, and Pawn, which only recurs other Caïssa programs--but that includes other Pawns. What you can do, then, with Deep Red as your console, is continuously loop Pawns. If they have a one-ICE central sitting around, every run you make nets you a free draw, a credit off of Scheherazade, and another counter on all of your Technical Writers. That's pretty darn good! But boy, that's a lot of red cards...

Which unfortunately brings us to our next problem: Exile has no influence. Sure, it may say he's got the standard 15, but the Clone Chips are absolutely mandatory. And then you're importing all of the pieces of the Street Chess engine, which given that you probably want three Deep Red and a full suite of Pawns, and a single Scheherazade, is another 7 influence. So now you've got all of 5 influence to play with--and one of those pips is likely going to Lady. Still, 4 pips to play with isn't nothing, right?

Except that now we're running into another problem: actually taking advantage of all of our heap installs. Refreshing Lady is a nice trick, but we can't really go full Dog Mode with Cuj.0 and Rex--after all, we don't have the influence. Bouncing a Cyber-Cypher with a Scavenge is a good trick, but what we really need is some way to trash programs for value--well, Aesop runs a Pawnshop for a reason, right? And Cache is a card you'll happily recur again and again, and then sell off! Excellent! Now we just need to import a card or two for our breaker suite, and... sorry, what's that you say? We only have one influence left? And we still don't have a sentry breaker? Uh-oh. Could this be Creeper's time to shine? (No. No, it is really kind of not--8 credits to break an Ichi 1.0, oh boy!). Those four points from the NAPD are really hurting right now.

Of course, you could abandon any part of this engine, but that just brings you back around to your first problem: why are you playing Exile in the first place? You've had to jump through about twenty hoops, and now what you've got to show for it is an admittedly pretty strong engine, a point of link, and a breaker suite that you only had about two free influence for. Now, the deck is quite fun, don't get me wrong. It can and does win games! But at the end of the day, you're playing Exile because you want to play Exile (maybe out of love for that collared shirt plus hoodie combo), not because Exile is a competitive option. But hey, even if he's garbage-tier, at least he's in his element, right?

(Business First era)
The Lord of Hats 72
Overmind is a pretty solid solution to the breaker suite problem in the Pawn Exile deck. Combos nicely with Deep Red and Scavenge. Not great, but I was running that post MWL for a moment or two. But yeah.. Nothing even remotely approaching bringing our sad garbage boy to tier one. — forktines 28 Mar 2016
I honestly think Streetchess was at least tier 1.5, he had a decent to favourable matchup to most of the tier 1 decks, at least in my meta. But MWL had me cut 4 influence (3 clone chip and a parasite) and the only card I could cut was D4v1d. Cutting D4v1d means just giving up against Blue Sun which is starting to make a comeback here so... :/ — Yziel 1 Apr 2016
Well, you could abandon ONE of the Caches and run any of the two-influence Sentry breakers (Shrike, maybe?) — LordRandomness 6 Jun 2016
4

I know of two main Exile archetypes that are capable, both of which rely upon run economy engines: Pawn, also known as "Streetchess", and MKUltra/Black Orchestra, also known as "Conspiracy".

---Streetchess has been removed by rotation. This is his first archetype, by which players would combine Pawns with Deep Red, Scheherazade, and Technical Writer. Each trigger, which may occur on each successful run, nets one card draw and about 1-4 credits, which also allows for click compression by triggering successful runs on archives. This engine is reliant on the amount of ice the corp player protects his central servers with, making it weaker to glacier archetypes. However, it is a very strong counter to asset spam, as it can easily and uncounterably trigger successful runs on unprotected assets, combined with the usually less protected centrals of the asset spam archetype, to create a late game click compression and run economy surpassing any other.

---Conspiracy is the modern, although weak, iteration of the Exile archetype, as it lost many of its combo pieces to rotation. This installs MKUltra and maybe Black Orchestras from the heap, (using Sahasrara, Cybsoft MacroDrive, and/or Dhegdheer to reduce their install costs), to place credits on Technical Writers and sell them later to Aesop's Pawnshop. Reliant on the ice composition and arrangement of the corp player, as you would be influenced on running certain servers over others. Requires large amounts of memory. No significant strengths or weaknesses.

Outside of these archetypes, Exile pairs well with recurring temporary programs, such as Cerberus "Lady" H1 and Nyashia. May also be used with Panchatantra, Sharpshooter, and Deus X recursion breaking, although that archetype is very weak.

So far besides the whole Street chess Pawn, Scheherazade, Deep Red thing. The only other reason to run Exile: Streethawk for now is to stop Scorched Earth with Clone Chips.

after hitting Duggar's use clone chips to draw from Angel Arena ( I would place six on myself so i know i can search six deep in time of stress), then install using Savoir-faire gaining a click from Autoscripter.

Update: There have been some nice things done with Cache recursion on Scheherazade then selling to Aesop's Pawnshop you can use Cybsoft MacroDrive or Sahasrara to save money. Grimoire tends to be over kill. This means alot of cards can be used for money, even 1 or 2 cost programs can net you 4 credits.

" It only works once friend. " - Jaggerbyte.

(Up and Over era)
Jaggerbyte 35
Best to note that NAPD Most Wanted attacks his clone chip. — kando 1 Jan 2016