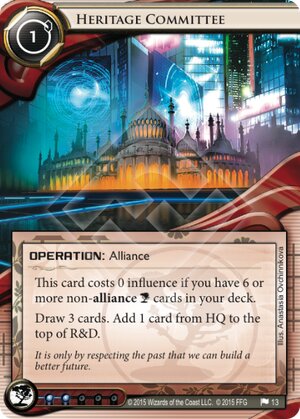 This card costs 0 influence if you have 6 or more non-alliance jinteki cards in your deck.

It is only by respecting the past that we can build a better future.
Illustrated by Anastasia Ovchinnikova
Decklists with this card

This card can be combined with Accelerated Beta Test, Accelerated Diagnostics and Mutate. Also you can use it before Power Shutdown to trash the least valuable card.
It can work as anti-RnD-lock: potentialy you draw past RnD lock and also put Snare! to the top of RnD.

TL;DR — HC won't see much out of faction play because it's not powerful enough to pay influence for & Jinteki doesn't have six influence-cheap cards to import alongside it. In faction, it's best use is to fuel some fun, inconsistent combos.

An unassuming little card that introduces the "alliance" dynamic of the Mumbad cycle. Let's analyze, shall we?

We draw three cards, paying 1 , like I've Had Worse, but then we put one back on top of our deck. That makes HC function poorly as pure card draw; the end result after playing it is only one additional card in your hand, so if you're trying to accumulate cards then simply clicking to draw is more efficient. However, draw cards like these essentially thin out your deck so there's some modicum of utility there, but Anonymous Tip and the HB Clearances are strictly better.

Putting a card back on top of RnD, however, is an interesting effect. It functionally means one can make RnD safe from single access for the next turn (& slightly safer from multi-access), presuming we don't trigger shuffle effects such as Jackson Howard. That makes this card not only a combo piece but an odd sort of RnD defense. Combined with the draw effect, this has utility in Industrial Genomics lists that run few ICE but many traps, letting one defend RnD for a turn plus overdraw to discard cards & power the ID ability.

@alex_monk's review points out the Mutate interaction, which is powerful but not exactly efficient. Jinteki just don't have many huge pieces of ICE that make a four card combo worthwhile; we need a cheap piece of rezzed ICE, plus a big piece of ICE, Heritage Committee, & Mutate in our hand. If, for instance, we Mutate a Pup into Susanoo-No-Mikoto, we will have spent 3 cards, 3, & 4 just to cheat out a 9 piece of ICE. That puts Heritage Committee at roughly the same effectiveness as Green Level Clearance (if you value 1 at 1 but yes this is an abstraction) but only if you have the combo pieces. If we're using Mutate, Janus 1.0 and Archer are much better options from out of faction and they're not too bad an influence strain given their power level. I'm going to build decks based around this idea for months, & I will be frustrated by them.

Finally, one interaction that was missed in the prior review was with An Offer You Can't Refuse. Offer has, to this point, mostly been used on Archives as the corp can load archives with on-access triggers like Shock!, Shi.Kyū, News Team, & Space Camp. Heritage Committee adds RnD to the mix as well; we can put a Snare! back on top, which sets us up for either a Scorched Earth or Neural EMP* flatline. If the runner takes the bait (they never will, trust me).

You probably don't pay two influence for this out of faction. As @alex_monk points out, there are some marginal interactions with the two Accelerated HB cards. That said, HC only ensures the very top card is useful, so it does not reduce the risk factor of those cards enough to warrant a deck slot. The Foundry is perhaps an exception to this, as one could use HC to place a valuable ICE (something The Foundry often has in HQ) on top, then fire an ABT, and shuffle back non-ICE cards per the ABT-Foundry ruling. I can envision a NEXT ICE Foundry deck aiming for the Batty-Gold combo with these inclusions:

That leaves the list with five free influence, enough for 3 Jackson & something fun (Tollbooth, 2x Crisium Grid, etc.). Not bad, but not great. The problem here is that finding 6 easily splashable Jinteki cards is awkward with the current card pool. The faction has many odd cards that only synergise in faction & the most desirable ones for other factions have aggressive influence prices, with Caprice being an obvious example. Lotus Field & Swordsman are arguably the most splashable Jinteki cards & I could see them commonly appearing in Heritage Committee lists that attempt to take advantage of the Alliance dynamic.

The other direction I could see an out-of-faction HC deck take is a Mutate-Janus 1.0-Wotan combo, also out of HB. Mutate, like Batty, is three influence so you could have a similar spread of 2 Mutate & a bunch of influence-cheap Jinteki ICE, with Pup being very appealing (good on its own, easy to sacrifice to Mutate). So, of the other factions, HB is clearly the best for HC. Weyland also has some huge ICE for the Mutate combo, and Blue Sun: Powering the Future has the advantage of being able to return a Curtain Wall or Orion to hand only to cheat them back into play, so that's another possibility. But, again, that the Alliance benefit kicks in at a whopping six Jinteki cards makes this extremely tough to do in an effective manner while addressing a deck's other needs.

* Niche rules consideration: Neural EMP's condition is "if the runner made a run during his or her last turn", but An Offer You Can't Refuse fires on the corp's turn, so it does not fulfill this condition. The runner still needs to initiate a run for this flatline combo to work.

(Kala Ghoda era)
phette23 2236
Your review is very thorough but I believe you should mention the ability to top-stack a card on HQ and then shuffle it away for value e.g. Brainstorm in MtG — PentagonJR 25 Feb 2016
Hmm that is a possibility I hadn't thought of, an interesting use case. There are enough shuffle effects that this could be useful, e.g. it lets you ditch one agenda from HQ in combo with Executive Boot Camp. Great point! — phette23 28 Feb 2016