Whenever the Runner avoids or removes 1 or more tags, you may draw 1 card. 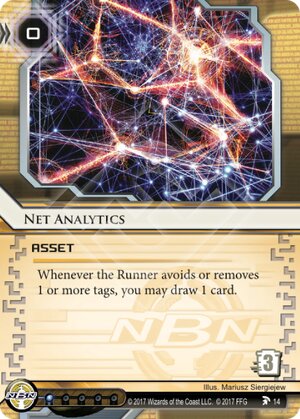 A card with a difficult value proposition.

Let's ignore for now the basic trash and res costs and even the question of how often you can get it to fire. The big question is: "is drawing cards good for the corp?"

Now obviously anything you can decide yourself ("may draw") is a good thing. But how good is it? How often is the ability to draw extra cards on the runner's turn going to help you? Keep in mind that you won't need to discard until the end of your turn so any cards you draw on the runner's turn will be available during yours.

If you have a hand of 3 or less so that you can draw without getting more than 5 cards in hand after your next mandatory drawing is probably a good idea. Whether this happens often depends on your deck and on how a particular match plays out. If it happens often enough Net Analytics may be useful for you. If not, well, like I said, it's a difficult value proposition.

Now to look at the numbers. 0 to rez, nice. 3 is not going to deter a runner from trashing it. 1 influence seems good but the reliance on tags makes it effectively NBN-only.

How often is it going to fire? If you have a tag heavy deck with lots of Data Ravens it may fire about every couple of turns. It's sure to fire once you would land a tag since it triggers both on remove and avoid. It won't fire if the runner floats the tags. If you see Obelus about the only thing Net Analytics will give you is ICE rezzing credits through Khondi Plaza.

Runners will generally remove tags if they think they can get to 0 tags. As powerful as it is playing Hard-Hitting News might end up hurting Net Analytics because runners may just shrug and go for broke. I know I did that recently (and got punished for it with a Psychographics).

If you have a tag heavy deck though are you going to have room for Net Analytics. It does suffer from 46th card syndrome. I would even go so far as to say it suffers from 56th card syndrome (I want to play it but there are about 10 cards I already can't fit in). Other NBN assets like Daily Business Show, Sensie Actors Union, Lily Lockwell and of course the soon-to-be-missed Jackson Howard also provide draw and are more reliable. For quick card draw Anonymous Tip helps as well and Special Report can be another good one if you don't need your current cards.

Not every yellow card can be a hero like Jackson Howard, and this isn't.

Give the Runner 1 tag. If this run is successful, the Runner removes 1 tag and the Corp MAY draw 1 card.

And this card is not unique so you can stack them and draw up to 3 cards !

A combo of two cards at 0 to install/rez, 3 to trash, 5 to break and 1 influence each; so 6 influence for 3 of each in a deck and six cards (that's the bad point). But now Sensie Actors Union is pretty unplayable, this can be a thing.

Breaking Bandwidth (not counting any MOD) cost 4-7 credits with some exception of course. A big tax to simply avoid you drawing 1 card (or 2 or 3 :)

Note that if they take off the tag later by another way ... you still gonna draw !!!!!

And if they keep it, you know the story ;)

OK, now we saw how it work, let's see what we can do with that !

So choose your weapon :

Now you catch my drift, build it !

(Earth's Scion era)
NulluN 7
It's certainly a neat combo. But 3 to trash isn't really that hard to do for the runner, though of course CtM helps make it more expensive. And once you make those tags become more meaningful than drawing a card the runner will be more inclined to pay the tax, making bandwidth taxing but not killing. So you can't really rely on it for tagging the runner. — Silv 9 Jun 2017
Zealous Judge is another reason not to let the bandwidth fire, btw. — Silv 9 Jun 2017