The Runner loses all credits in his or her credit pool. 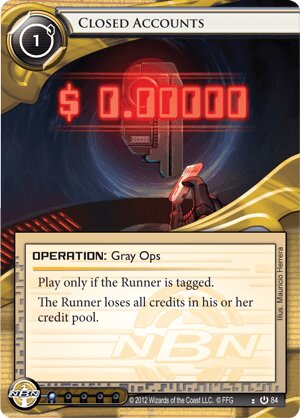 Closed Accounts is one of the few tag punishment cards that exists. A few more are starting to come out (Traffic Accident for instance) but they are still far and few between. That may actually be part of the design philosophy - with only a few cards that can punish the runner for being tagged (outside of the default corp action to trash a resource) it simplifies the options for playing around being tagged. Too many threats would make it an impossible situation to be tagged, forcing the runner into deadlock situations. With only a few possible fates (MU loss, credit loss, and meat damage) it can be played around with other cards, which gives a great option for the runner to make choices. Clear the tag, at the cost of time and money, or risk the fate that may come with the corp knowing the runners location.

That is good design. A choice, one that is difficult, but one that does not have a single viable option. Because there are only also a few cards that can tag the runner during the corp turn, this continues to make the tag mostly on the decision of the runner.

Closed Accounts is tag punishment, and it sees play, but never to the impact of cards like Scorched Earth have, but it can open scoring windows and create opportunities for the corp. It continues to see play, and will be a powerful card as long as ways to tag the runner are included in the corp deck, or at the least ways to force the runner to consider taking a tag.

Tag punishment operations are still rare enough that it's worth comparing them all individually, so let's take a look at the competition Closed Accounts will have for your valuable deck slots.

Bad Times: In the best case, Bad Times will knock out two MU of programs of the Runner's choice. In the worst, they have two MU spare and it does nothing. The main strike against Bad Times, however, is the four credit cost. With other tag punishment being either one credit, zero credits, or outright game-winning this cost is difficult to stomach unless you have some specific reason to want THIS effect. Zero influence does mean this will have a place in some specific builds that NEED their influence, though, especially with the advent of the NAPD Most Wanted list.

Freelancer and The All-Seeing I: These two are similar in effect, speeding up and cheapening the process of trashing resources on a tagged Runner. Freelancer trades the ability to hit ALL resources (striking only two) for a saving of one credit, one influence, and no ability to be nullified if you have bad publicity. Neither card does anything you couldn't already do with some time and money, but if you're anticipating wanting to trash a number of resources with your tags then they can be good picks.

Scorched Earth is a whopping four influence, and as such should generally only be imported if it's part of your plan to win. Traffic Accident is in a similar position, but for different reasons: It requires two tags and only deals two meat damage, which is relatively weak unless it's scoring you the flatline.

Psychographics is an oddball that your deck generally wants to be built around, but if your deck IS built around it then it's probably a lot stronger than this.

Which brings us to Closed Accounts. At 1 influence to include and 1 credit/1 card/1 click to play, it's cheap to play. The effect is almost universally useful, and if the Runner is broke for long enough that Closed Accounts isn't worth using then you're winning the game anyway! It offers the rare ability to hit the Runner's wallet directly, and if you have incidental tags floating around it does so with big impact and low cost (unlike something like Tollbooth which is a sizable investment). The effect is impactful, gives the corp breathing room, and can create a lose/lose if the Runner must either pay to remove tags or lose the money from this if they don't.

Of course, it's a dead card if you can't land a tag (although it's NOT dead if you land one and the Runner removes it, as the threat of it being in your deck is notable if they have seen it previously). So while it is a potent tag punishment splash-in for thinks like three Snare! Jinteki, it may be wise to limit it to one or two copies and simply hold it over the Runner's head as a threat to force them to waste time and money clearing tags or risk catastrophe. Certainly it becomes less useful in multiples since once you've emptied their credit pool once there's not much point doing so again for a while.

Overall, if you are finding that Runners tend to float tags against you then Closed Accounts is a strong option to punish them for such reckless behaviour. It's a nice tool for tagstorm (although there it must compete against Scorched Earth and stuff like Psychographics and the question is "why are you draining their bank account when you could just be winning the game?"), as well as functioning as a nasty surprise in decks that have incidental tagging lying around but don't make good use of it (Snare is the main thing here). It also gets bonus points against irritating Runner cards like Paparazzi and Account Siphon.

(Data and Destiny era)
LordRandomness 219
What about Shoot the Moon? — FarCryFromHuman 18 Jan 2016
@FarCryFromHuman : Shoot The Moon seems more conditional. You may have 2 unrezzed Tollbooth when you can use it and that's great, or you may have nothing unrezzed but a Pop-up, and that's terrible. While Closed Account is almost always useful. Is a Runner rich ? Not anymore. Are they next to broke ? That can be the difference between "Sure Gamble next turn" and "no Sure Gamble next turn." — Lupus Yonderboi 19 Jan 2016
It's not letting me edit, but yeah Shoot the Moon is in a similar basket to Psychographics. You want your build set up to abuse it, but if it is then yeah it'll probably be stronger. — LordRandomness 20 Jan 2016