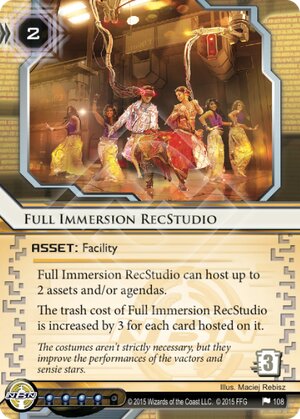 Full Immersion RecStudio can host up to 2 assets and/or agendas.

The trash cost of Full Immersion RecStudio is increased by 3 for each card hosted on it.

The costumes aren't strictly necessary, but they improve the performances of the vactors and sensie stars.
Illustrated by Maciej Rebisz
Decklists with this card

Here's the division in assets (up to Free Mars of Red Sands cycle has been released at time of writing):

(Not shown to keep review small and it's not really relevant)

While some 5 cards are not uncommon (Eve Campaign, Hostile Infrastructure, Jeeves Model Bioroids) the 6 and up cards are pretty rarely seen in actual play. And the 5 cards are not the kind you'd normally put together in NBN (or what you'd inport a •••• card for in HB). So I think it's safe to say that it's extremely unlikely that anyone will ever put two cards in a Rec Studio that together will cost more to trash than the RecStudio.

This means that RecStudio doesn't add risk unless the runner has a card that lets them trash an asset but only one asset. The only card that comes close is Drive By but that only works on unrezzed cards. Derezzing is also harmless, the cards hosted on it remain hosted (according to FAQ 4.0).

While the RecStudio doesn't add risk is does cost a deck slot, 2 to rez and is positional (it has to be rezzed before the assets and agendas to throw on it). That's still quite a few downsides, is the effect even worth it?

Frankly, I doubt it. Theoretically the benefit of installing multiple assets and/or agendas in the same server is that you only need a big chunk of ice in front of it to keep both installed cards safe. In practice runners get into the most heavily protected servers, especially with the rather weak ice that NBN tends to employ. And once in the runner simply can kill two birds with one stone. You just end up painting a bigger bullseye on your server.

There are of course janky plays. Since the runner has to access all cards when accessing you could do stuff like a double Edge of World server.

You would think there are some nasty sysops who get to play in the RecStudio as well but all sysops are upgrades. Characters, which are assets, are also harmless when accessed. Executives aren't traps either, except for Toshiyuki Sakai if you squint your eyes a bit.

I simply fail to see a realistic use case for Full Immersion RecStudio.

(Free Mars era)
Silv 314
I mean. What about the case where you install something juicy and a trap like Edge of World in the same server? Then they have to cop the trap to get the other thing... — LordRandomness 7 Aug 2017
Runner controls order of access so can access juicy bit, then trash RecStudio. Does cost 6 credits more than letting trap fire. — Silv 8 Aug 2017
Host Sandburg on Rec Studio in Glacier — synapticus 11 May 2018