If Edge of World is installed and you pay 3credit when the Runner accesses it, do 1 brain damage for each piece of ice protecting this server. 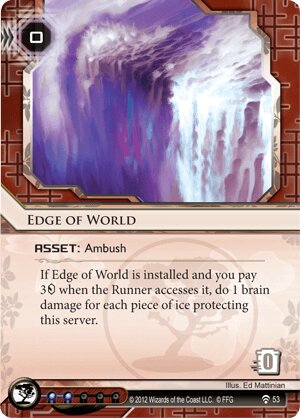 Edge of World is a beautifully thought-out asset that can have a huge impact on a game. However, it can require some time to set-up and can often be difficult to pull off. But when it does it is highly rewarding.

The key to using Edge of World efficiently is installing it behind as much ICE as you can. Rather than trying to build a server specifically for Edge of World I find it best to install it in a server that has just been freed up with a couple of pieces of ICE already protecting it. And thats where the beauty of this asset come from. The ICE just has to be there, rezzed or not it doesn’t matter. There are few things more satisfying than watching a Runner agonizing over wether to access or not after running a three deep server, you not rezzing any of it even though you have the credits. That satisfaction made all the more sweeter when they do access. Another asset that epitomizes the Jinteki mind games.

Of course this isn’t going to happen all the time and like most assets Edge of World has it’s pitfalls. Without the option to advance, the longer it is sat the table untouched, the less likely it is to be run on and unrezzed assets aren’t much of a concern. A possible workaround for this is to use Tennin Institute: The Secrets Within to try and work the bluff. That’s not to say Edge of World is now taking up space. As an example you can use it as protection for a Shell Corporation creating another hard decision for the Runner. Let you amass a wealth of credits or risk hitting what it is upgrading.

Along with this you are going to have manage your econ correctly. As soon as Edge of World is installed you are going to need to keep three credits in reserve. This is a fair costing considering that Edge of World can deliver a crippling amount of brain damage in a single blow. I would gladly pay the three credits for a single point of brain damage for the permanent effect it has.

(Breaker Bay era)
Brainteki 22
I love this series reviewing Jinteki's deadliest cards! One extra thought - Edge of World can easily be used as bait for multiple turns in an upgrades deck. You put the Edge of World in, they don't run, so you put the Ash in, they don't run, so you put the Corporate Troubleshooter. Every turn its more likely that you just put down a 3/x agenda so they have fresh incentive to run. If they still don't run, you replace the Edge of World with an agenda and score it out because now your server is pumped up with upgrades and they're not getting in! — Ber 9 May 2015
Shell Corporation is brilliant! Thanks! I've always wanted to make EoW work and this is the trick. — bourgman 26 Jun 2017
4

This is one of my favorite cards in the game, and I have no idea why it's not a more popular splash option. I run it in my Blue Sun: Powering the Future and in my Argus Security: Protection Guaranteed decks, and it never fails to go off once it's been installed. People seem to prefer Snare! since it has a tagging element to it, but there's no reason you can't run both. I'm currently testing a build with 1x Edge of World and 1x Cerebral Overwriter, augmented with 3x Snare!, and they work beautifully together. Once the Runner seeings one, they will not be expecting the other. Since they behave the opposite of each other, they compliment your mind games quite nicely.

And, of course, once you manage to slap the Runner with some brain damage (from any source -- some prefer Janus 1.0, particularly out of Blue Sun, and that's a fair choice, too), finishing the job with meat damage becomes much, much easier because you'll often only need a single Scorched Earth or Punitive Counterstrike to finish the job.

(Order and Chaos era)
KitsuAeryn 292
Would you mind publishing that decklist? Would love to try it! — catnip 1 Apr 2015
Absolutely! Here's the current build; hope you enjoy it!http://netrunnerdb.com/en/decklist/18611/argus-attrition — KitsuAeryn 6 Apr 2015