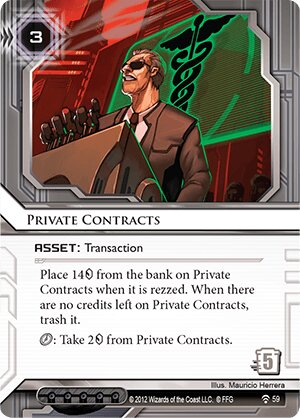 A stock of 14 with a trash cost of 5 seems pretty neat, but maybe not so good in the long run.

More than clicking for credit, but not that much. More so, it takes to break even, so these first three clicks are not more valuable than clicking 3 times for credits, so if your goal is to recover quickly as soon as installed (like its Runner counterpart permits), it fails.

That if it is not trashed before it's emptied, but let's be fair, it can stay on the table that long, as it's expansive to trash and the less interesting to do the more you use it.

So it's no mystery if asset spamming decks prefer dripping economy like PAD Campaign, Marked Accounts or Adonis Campaign, for just naming the more popular. Or if the ones which use their scoring server for limited time, big money assets prefer Melange Mining Corp., Adonis Campaign and Eve Campaign.

Of course, the drawbacks of Private Campaigns can be mitigated by Breaker Bay Grid or Expo Grid, but then again, other economy assets equally benefit from those cards.

On a bright note, it's influence free, sex-bots out of Haas-Bioroid can't tell that much. Also, Blue Sun can make it come from "meh" to "decent".

(Data and Destiny era)
Lupus Yonderboi 233
You can sum it up as a card that gives you 8 credits over 4 clicks with a setup of 4 clicks (1 install + 3 click for credits). So it's a slow day job for corp and because it's neutral it's alright if you need money desperately. — Capstone 15 Nov 2015
In case you're puzzled why anyone would play a card with that poor of a return of investment, compared to simply clicking for credits, I think Private Contracts did have some justification in early Netrunner as an anti-Account Siphon tool. You have to manage your credit pool so the rez cost will drop you below the Siphon's full payout, and then you can make a relatively quick recovery, unless the runner goes to trash it for 5. — Hannibal Rex 8 Feb 2016
7

Cmon guys, it's not so bad. Private Contracts fills a very specific niche in the meta that not many other corporation cards can, because it's something to do when you have nothing better to do.

Let's get the clear advantage out of the way first. 5 to trash and a limited supply of credits is a real disincentive for the runner, which means that it often can be left undefended. That's great, because this is not a "money up, rez ice" card like Melange Mining Corp. or Adonis Campaign. That means you really don't want to put it in your scoring server. But that's fine, because:

The subtle second benefit of this card comes from the nature of playing corp. Drawing a card can often be a dangerous action as it may leave you flooded, so often you find yourself spending that last click doing anything else. But there are surprisingly few options: IT Department is arguably the best choice in the right deck, and for money there's only Capital Investors and Shell Corporation, which are easily trashable in most decks. If you extend the search to 2 click actions, there's Gila Hands Arcology and Government Contracts, but they're agendas. That's how Private Contracts circumvents the return on investment problem: when there's no alternatives, then it's the best card available! Shoddy clicks per credits? It's better than 1 click per credit!

So that's the intention: play this card in a deck where drawing and playing a card is worse than doing nothing. When does that happen? Well, it's potentially an issue for Jinteki: their HQ defense is pretty weak anyway, and if they draw an advanceable trap they can't really use it anyway. On top of that, they might want to preserve cards on top of R&D in case they're being deep-digged by Medium. The comparatively high rez cost does hurt it here though, since Jinteki needs money most when they're poor, like after Account Siphon, but the richness of the runner allows them to go in and trash Private Contracts when they wouldn't be able to touch alternatives like scored Gila Hands Arcology.

But the deck I've seen Private Contracts shine most in is asset spam Gagarin Deep Space: Expanding the Horizon, especially around about the time Order and Chaos came out, before cards like Public Support came out to take up deck slots. Gagarin's weakness is central servers, and hitting Private Contracts stops agendas going into hand and doesn't put fresh cards on R&D. It's effective 6 trash cost is obscene, it's an asset so synergises with everything from Tour Guide to forcing the runner to keep you honest, and unlike other options like The Root or advancing space ice it gives you "real" credits to help land SEA Source. The second most popular Gagarin deck on OCTGN runs 3 of this card. "Worst card in the game?" Hell no!

So when do you slot this card? Well, count the number of times you click for credits in a normal game. If you do it 3 or fewer times, you don't want this card. if you do it 6 or more times, it's a decent return on investment. If you do it more than 9 times, then your deck probably doesn't have enough money cards in it anyway and Private Contracts alone won't solve your problem. After all, it's only a little over a credit per click.

And even if you decide to put it back in the binder, at least take a moment to appreciate the sick green rimlight.

This is easily the worst card in the game. 9 clicks for 11 credits (in total, including drawing and installing) means this only breaks even (compared to clicking for credits) after spending 7 clicks on it; before click 7 you're behind on credits. No-one should even waste their time reading the text on this card, let alone including it in their deck. If you even consider using this card, you should stop playing Netrunner. I can't believe you're wasting time reading this review.

(Kala Ghoda era)
Seanwhat 2
Very good points, I used to use this card, and slowly it kept getting cut for different more efficient assets, but I never realized just how poor the ROI was until now. But Worst Card in the game? Not while Push Your Luck exists, and is mathematically a negative ROI. — The Traveling Hero 2 Mar 2016
I don't think you can call a card that made the top tables at Worlds "the worst card in the game". But even outside of Blue Sun, it's useful in Gagarin as "yet another stupid remote", and has historically seen some play as anti-siphon tech. You could rez it during a siphon to hide your money somewhere safe. The original Dorian's Blades list uses it in this way, for instance. — RS14 2 Mar 2016