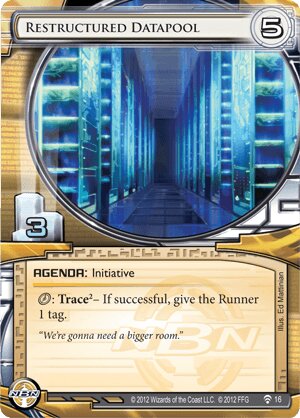 Tag storm strategies using Tag dependent gotcha operation cards such as: Scorched Earth, Bad Times, Big Brother, Closed Accounts, Freelancer, Psychographics, Shoot the Moon, The All-Seeing I, Traffic Accident all could benefit from Restructured Datapool's ability allow the corp to trace it's way to getting tags on the runner.

Tag dependent Agendas such as; Private Security Force, Market Research, Quantum Predictive Model become more powerful when you have more flexibility in getting tags onto the runner.

Tag dependent ice such as: Pachinko, Resistor & Universal Connectivity Feehave much more bite if the runner is tagged, a scored Restructured Datapool can help make this more likely.

Tag Dependant ID SYNC: Everything, Everywhere would benefit by having an always available option for getting tags onto the runner

Restructured Datapool is the only NBN 5/3 agenda, helps with agenda compression decks

If runner link is weak, a scored Restructured Datapool with the runner fearing tags gives the corp an opportunity to tax the runner on-demand for the remainder of the game.

Same as all other 5/3 agendas, high risk/high reward gambit

Trace 2 is weak and will most always require buffing in order to be successful.

Link defense cards such as: Rabbit Hole, Access to Globalsec etc can quickly make using Restructured Datapool more costly to the corp than to the runner.

Tag Storm: NBN Tag storm decks might want to give a close look at including this agenda where every turn the corp could seize momentum by forcing the runner will to pay to avoid getting as many as three tags a turn. If the runner runs out of credits to fend them off, getting rid of them could be even more expensive in terms of s & s. (Note: Yes a strong economy will already need to be established for tag storm to really work it's magic) Agenda Card Compression: From an agenda/card compression stand-point the case for this card isn't quite as strong, still other than Restructured Datapool, for NBN the only option is to look to a pile of neutral 5/3 agendas; Eden Fragment, Executive Retreat, Global Food Initiative, Hades Fragment, Priority Requisition & Utopia Fragment. Not to mention the neutral 6/4 Vanity Project provides even better agenda/card compression.

(Data and Destiny era)
chris_walker 643
I think you missed the point of what this agenda does on an _unsuccessful_ trace. Let's say the runner has 0 link. The corp pays a click to start a trace with str 2 and doesn't boost it. The runner boosts for 2 creds and the trace fails. Essentially the corp just clicked for -2 runner creds. Clicking for 2 creds is huge, but clicking for -2 opponent creds? That can be even better! All you need to do to pull this off is the runner not wanting to get tagged at all. And that's pretty easy as NBN against most runners. There's also very few real counters to this, as NACH or clearing tags will cost the same 2 creds. — Krams 27 Nov 2015
Thanks Krams, that is a good point, i have added it to the Pros section of the review. — chris_walker 1 Dec 2015