He flicked the display population to high, and was surrounded by a circle of floating holos. The ping-back was strong, the clearance level blue-one. Now to find the perfect place for a relay…
Neutral • Mike Nesbitt • Core Set 52
All sets:
Links: Decklists | ANCUR 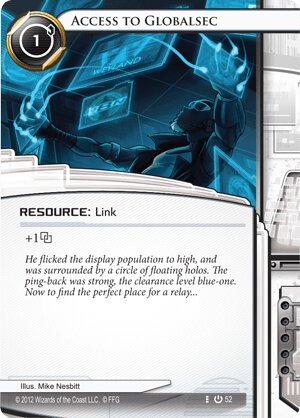 This is not really a review of this card in particular, so much as a review of the state of Link in general. Because it's tough out here in standard. Gone are the days of triple Rabbit Hole, and we are in a distinctly linkless era.

Our options for link at the moment are:

All of these also means giving up your Console slot, which isn't very attractive if all you wanted was some Link.

Our best option seems to be Sports Hopper, and that's not a great place to be in. Link as a mechanic is the counterplay to strong Traces, such as CtM and Surveyor. If your deck had a problem with these tactics, your answer would have been to slot some Link and give yourself a fighting chance.

Which is a strange thing. Cards like No One Home, Citadel Sanctuary and everything Sunny Lebeau ever did clearly shows an interest in traces as a mechanic from both sides of the game. Yet Runners have very few options to find some good sources for Link, even as Traces are becoming meaner, stronger and more punishing.

I for one am looking forward to when we can have Link be a bigger deal again, and really exploring what can be done with the mechanic.

(Uprising Booster Pack era)
pang4 819
This card alone shows how weird Link is. Despite its mostly attractive numbers, it never saw any play which is the same for most of the cards you mentioned. On the other extreme, we were given cards like Maxwell James. — BlackCherries 7 Nov 2019
I think the time for "pure" link is behind us. I'd rather see more auxillary link on cards, like how Compromised Employee used to be, or how Talut is now. — pang4 7 Nov 2019
I agree with your comment, pang4, that "auxillary" link cards are the way to go. I'm not a fan of the link mechanic, and especially not cards that let you repeatedly initiate traces as the runner. IMO link should only be reserved for being a silver bullet against trace-heavy decks, and I wish it were decoupled from all the other mechanics such as cloud. — dnddmdb 7 Nov 2019
as seen from the experience, when link was a silver bullet against trace-heavy decks, it was never used. At least now there is a way to incorporate link into your deck without feeling like a complete failure — Shieldwall 7 Nov 2019
My issue is that unfortunately link has that silver bullet effect, even if you didn't mean to include it that way. I wish that was decoupled. Because a deck that focuses on link to activate things like cloud, or win self-induced traces like Security Nexus, also just happen to randomly have a huge advantage against trace-heavy decks. So not only do you have a functioning deck against most archetypes, you've accidentally built an even better deck against one particular archetype. And unfortunately link really adds up in an irritating way. Once you hit link 3 or 4, most traces meant to tax the runner are just blank, which isn't very fun for the corp. — dnddmdb 7 Nov 2019
1

Link is, sadly, one of the most underused mechanics of the game. Although this may change as the ‘Cloud’ subtype of breakers starts to become more popular, Access to Globalsec is still not going to be the go to choice for runners to find link. It simply is too narrow a card, only providing one benefit for a mechanic that is rarely used. Even if Traces become the most popular thing the corp can use, the other methods that provide Link are still going to be more popular than Access, if just because they generally also offer something else as well (Memory, deck thinning, recurring credits) Sadly this means that Access to Globalsec is likely never to have much of an impact on the meta.