As an additional cost to steal an agenda, the Runner must pay 2credit for each advancement token on that agenda. 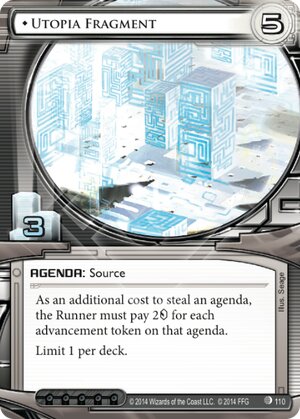 Adding an additional cost before the runner can steal an agenda has been proved as a very powerful mechanic by the NAPD Contract, hated by many runners and loved by many corps (ok, NBN first and foremost!).

If you install an agenda and the advance it twice, you're basically making it a clone of NAPD, telling the runner he'll have to pay 4 credits more (in addition to actually reaching it, that is). Not to mention, it works on NAPD Contract as well, and 8 credits is definitely a lot to pay for just 2 points.

You have some bad publicity? No big deal, keep advancing that NAPD, it'll just make it increasingly expensive to steal, after all.

Mushin No Shin rejoyces too, you can just use it on an agenda and place a single ice in front of it. The price to reach & steal that agenda might already be too much for the runner.

I would say it's a pretty nice ability for a 5/3 Agenda, easily worth a place in my decks. Not that you can have more than one anyway, unfortunately: Limit 1 per deck.!

(Up and Over era)
paddosan 3351
If you do happen to score it, most runners will simply give up on your scoring attempts. Bane or boon, a scored Utopia Fragment makes any advanced card a lose/lose for the Runner. — hi_impact 23 Apr 2015
Unfortunatly, you're reading it wrong (as I did) : it needs to be scored so that its text benefits OTHER agendas later on. — Aube88 1 Aug 2019
6

Utopia Fragment suffers from the fact that it's benefit runs directly contradictory to its unique 5/3 nature. Not only is it hard to score early, but you're unlikely to pull it when you want to (as your first agenda). Even if you do score it first you're almost halfway to victory already and so the effect is only in play for your remaining 2-3 agendas, and compounding that it's unlikely to be used on your 2/1s since you can just score those out of hand.

But, if you do score it first and you're running a few 3/1s (or I guess 2/0s?) such that you still have a few agendas to score it can be quite powerful. 4c is no small tax for the runner, and that's assuming you don't play tricks with advanceable traps. (Since the runner will know not to run until they can afford the extra tax, you can bait them into it just to have them waste their excess ice money).

Ultimately though that's bad deck building practice, so I'm of the opinion that this card is relegated to jank. That being said I'm sure getting an Underway Renovation with 10+ advancements on it would be funny even for the runner. An interesting point of note however is that this card synergizes quite well with mid seasons/Weyland tag and bag ESPECIALLY with Oaktown Grid as the advancements both fuel you and cost the runner a huge tax which will open up even the richest runner to counterattack.

(Blood Money era)
Difrakt 20
Oaktown renovation you mean. And you are right, though potentially powerful, this card is hard to use effectively since it's a limit one per deck. The other problem is Film Critic; this is one of the many, many cards that she negates. — quailman2101 30 Aug 2016
One possible approach to consider is to let the runner steal it, then target it with Media Blitz. Of course, this does mean giving the runner three points. — Thaddux 31 Aug 2016
Exchange of information also works. Doubly so with 15 Minutes. — Goldstep 31 Aug 2016
2

The ability is good, but as with the other one-of 5/3s, the trick is finding and scoring the agenda early enough for it to matter. This might work best in a Jinteki PE deck with Mushins, but there, it is in direct competition with The Future Perfect for your deck space.