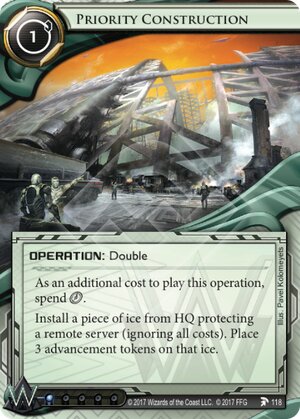 Install a piece of ice from HQ protecting a remote server (ignoring all costs). Place 3 advancement tokens on that ice.

Fantasy Flight have gone insane. That's the only reasonable explanation for this card.

One of the most restrictive things about advanceable ICE is the investment in and that makes them good. Even the free provided by Weyland Consortium: Because We Built It doesn't serve to justify the it takes to bring an Ice Wall up to strength or a Mausolus up to run-ending range, when those would be better spent setting up agendas or assets. Advanceable ICE has a better home in glacier decks, but then there's the additional costs of installing ICE in positions >0, which already hurts without having to invest more into the ICE itself.

But now, we have Priority Construction, since those Martian domes aren't gonna build themselves. Sure, it's a double. Sure, it costs a already. But look! What's that in the middle of the text? It's the holy trio of card words: "ignoring all costs".

The closest comparison I can draw here is to Replanting, which also has the magic words in it. Priority Construction is a boon to Weyland glacier decks, which can now spam out space ICE like Wormhole for essentially free. Of course there's the extra click to consider, or the upfront costs, but the important bit here is that those costs are more than halved with this card. If you were to install a piece of ICE and advance it three times, that would cost you 3 and 4. With Priority Construction, that cost has been reduced to 1 and 2 - not even counting additional savings for putting ice in positions 1 or greater.

But let's leave glaciers behind for a moment. What about Weyland Fast-Advance? What can the dome-builders do for them?

Well, why don't we consider Red Planet Couriers? Say you've gotten your Wormholes or your Asteroid Belts out, and don't need those credits anymore. Maybe you've got the shape-shifting suite out, with a pile of credits that are just lying there dead. Sure, you could move them with Constellation Protocol or Trick of Light or some other shenanigans. Or you could plaster a Project Atlas with enough tutoring tokens to drown a cow (or murder a Runner). Hell, dare I say it? There's enough credits there to, I don't know, take over a government?

But aside from all of that, what can the average Corp do with this sort of shenanigan? Obviously benefits the most from this card. But it's 1 influence to splash, so it's not out of the question to have Trick of Light in play with this in . Alternatively there's always the choice to just import the occasional Ice Wall into another faction. Even Weyland's suite of incredibly shitty early cycle ICE can benefit from three advancement tokens.

tl;dr - FFG should really be more careful what they print "ignoring all costs" on. Priority Requisition is a versatile operation that greatly reduces costs involved in several strategies both in and out of Weyland. It's good for glaciers, it's good for FA, and it's good for mucking about trying to make ridiculous jank plays. Now if you'll excuse me I need to go and try to score Government Takeover.

(Crimson Dust era)
Agenarchi 78
They tried to balance it out with an interesting restriction. It's remote only. Some FA decks try to bunker up centrals and FA out agendas without having a permanent remote server. It can easily be done in Weyland as 'Biotic Couriers Takeover' (just play these 3 cards in one turn to earn 6 points for 9 creds instantly - all you need is 9 tokens on the field, preferably in front of your centrals). Priority Construction can NOT do this. Remote only makes this, at it's heart, a glacier card. Good old scoring remote building glacier. I love it. — Krams 25 Aug 2017
For one influence it's tasty in tennin — YankeeFlatline 25 Aug 2017
It's definitely good, great even in some decks. But it's much more reasonable than it's cousin mushin no shin. That card can almost instantly win and lose games. — quailman2101 25 Aug 2017
It can't be used on the centrals, which is a significant restriction. I still think the card is great, but time will tell. — KitsuAeryn 28 Aug 2017