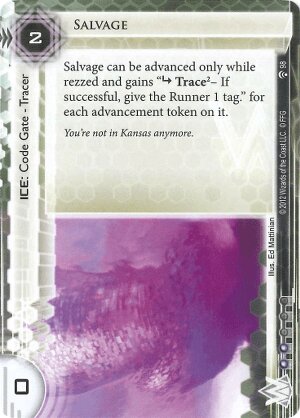 Salvage can be advanced only while rezzed and gains “subroutine Trace [2]– If successful, give the Runner 1 tag.” for each advancement token on it.

You're not in Kansas anymore.
Illustrated by Ed Mattinian
Decklists with this card

To put it simply... this card is garbage is essentially every way. But I'll elaborate.

First off, it's broken for 0 by Yog.0. Every time. This was considered a crippling weakness back when it was released, but now Yog.0 isn't nearly as popular. Still it's worth noting that it'll be worthless against certain Anarch matchups.

Secondly, it can't be advanced while unrezzed. That means that it can't take the runner by surprise, which is the only real value in tracing tag subroutines. Futhermore, it won't do a single thing the first time it's run against. You'll just rez it and the runner will go past it, since it has no subroutines.

Thirdly, it has ZERO strength. That's complete crap. It will always be broken for one per subroutine. (discounting breakers like Knight)

I guess you could see a little bit of play in weird Weyland Midway Station Grid decks, but honestly it's likely still bad there. This ice is the true representation of the fact that Weyland has almost no good code gates.

(All That Remains era)
AwkwardPizza 62
Security Nexus rusts the nail in the coffin of this ice firmly in place. Makes you cry for a Power Tap. — Goldstep 4 Aug 2015
I think this card illustrates why nobody likes the advancable ice from the Genesis cycle: it needs to be rezzed, has a high cost to become somewhat powerful and dies in two rounds to parasite. The only application for this in draft. — Capstone 11 Nov 2015
Even worse than being broken for one per subroutine, a single Parasite instantly destroys your investment. — LordRandomness 13 Dec 2016
With the introduction of Anson Rose, this ice can now be considered still garbage. — Oooer 3 Mar 2017