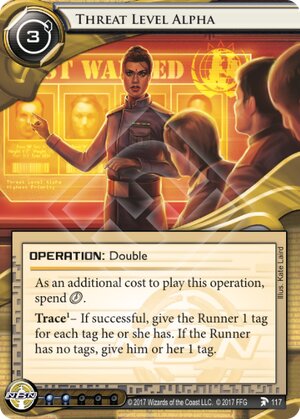 Trace[1]. If successful, give the Runner 1 tag for each tag they have or, if the Runner has no tags, give them 1 tag.

Illustrated by Kate Laird
Decklists with this card

Threat Level Alpha is not a good card.

What it does for the corp is to trace-tag a runner on demand. Unfortunately, the steep play cost (2, 3) for a measly 1-strength trace makes it of dubious value. The obvious comparison here would be SEA Source, which offers a better trace for less clicks and credits.

The advantages TLA brings to the table is adding lots of tags for a runner already floating several, and being able to be played without restrictions on performed runs. Let's take a look at both.

The tag-doubling isn't a very strong ability. You can divide runners roughly in two groups: Those who try to remain untagged when their turn ends, and those that don't care if they're tagged during the corp's turn. Against the former, you're unlikely to benefit from tag doubling- it'll be a rare event that they're floating two tags or more during your turn for you to capitalize on, since that puts them in BOOM! range. Against a tagstorm runner, on the other hand, you'll probably be allowed to double their tags, but doing so can set up an opportunity for dangerous combos involving Obelus, Mars for Martians and Counter Surveillance. You'll also need some specialized support cards like Psychographics to take proper advantage of the myriad tags they're now floating.

Tracing on demand without restrictions, on the other hand, is undeniably handy. Runners who fear Hard-Hitting News will try to reserve enough credits to contest the trace or clear tags in a single turn, but may think themselves safe- and hence spend their credit reserve on installs- as long as they're not running. With a considerable credit lead, the corp can force the trace through and follow up with The All-Seeing I or Exchange of Information, for example.

Bottom line, the high play cost combined the weak trace strength makes the inclusion of Threat Level Alpha hard to justify. To be worthwhile, it demands good combo cards and preferably a runner who has already been bled poor.

(Crimson Dust era)
Snowscoran 45
Threat Level Alpha possibly goes into an Aryabhata CTM shell, in actuality. It's yet another tax on a bled-dried runner that potentially turns into all sorts of nastiness. Psychographics would be the least of it. — obscurica 27 Aug 2017
Sure enough, if you have a bunch of rezzed Primary Transmission Dish and Arabhyata Tech, anything that can trace the runner on demand is good. The problem is that TLA is expensive and has a bad base trace strength. You have limited deck space for trace operations and I'd much rather slot Hatchet Job or Invasion of Privacy, who are cheaper with better strength traces (and comparable if not superior effects). — Snowscoran 27 Aug 2017
The fact that you can do this without the runner doing anything is a key facet of its appeal. Perhaps not enough of a reason to run it, but it's a reliable "I'm richer than you" tag. — KitsuAeryn 28 Aug 2017