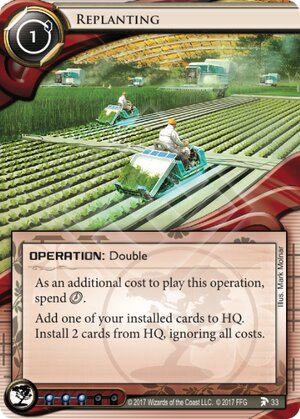 Add one of your installed cards to HQ. Install 2 cards from HQ, ignoring all costs.

I admit I'm not great at Jinteki. Consider this a review to tease out opinions from more experienced players.

Replanting at the face of it doesn't look all that great. Take one cards from the table into your hand, install two. Net result: the same number of cards on the table with 1 and one wasted.

So how could we use this? The faction does give an idea. Jinteki is known for its traps but what are you going to do with a failed trap? Sure, you could use Back Channels to gain credits for an advanced Project Junebug. But for assets cards that can't be advanced there isn't really all that much you can do except just trash them when you install a new card in that server. With Replanting you could take a failed trap back to hand and retry it later, with a bonus of being able to install a few cards in its place now.

Note that you install ignoring all costs. On the corp side the only cards with install cost are ice, based on the position of said ice. Being able to install ice in the fourth or fifth slot of a server without having to pay 3 or 4 respectively is enticing.

If there's anything runners hate when dealing with Jinteki it's facedown cards. Facedown cards are dangerous even in NBN and Jinteki has a truckload of traps available. And being able to do a bit of server re-arrangement can be quite helpful, especially when playing with positional ice.

Another thing to note, even for players of other factions, is that there are some cards you want to take back to hand at some point. A typical example is Adonis Campaign. Since you add an installed card to HQ before installing cards from HQ you can use Replanting to reinstall an Adonis Campaign that has 3 left on it. Sure, it'll only effectively net you 5 before you replant (9 taken minus a 4 rez cost) but all in all and taking into account the cost for Replanting you get 12 out of it (the 9 gained from the initial install goes to two rezzes and Replanting). Ok, maybe not the most economical use. I guess Eve Campaign is better while it's still legal as you can get 14 before having replant it for a total net profit of 19. The third limited no-click money card: Launch Campaign gives a net profit of 8 with replanting.

Replanting is also useful for countering things like Parasite and Femme Fatale.

And as long as she's still around being able to re-rez Elizabeth Mills can be quite interesting.

My conclusion for now: Replanting is a versatile card. I think it will take some skill to make the best use out of it, but if you're playing classic mind-game Jinteki extra flexibility translates to extra unpredictability and hopefully fear paralysis for the runner.

(Station One era)
Silv 315
please only review cards you actually playtested — Dr.Evil 31 Mar 2017
Good ideas :) When I saw it I thought it would work well with Edge of World and Valley Grid to cheaply get those servers stacked with ice. Another I would be to play it with hasty/accelerated diagnostics to install maybe an agenda with a Team Sponsorship for some interesting combos. — Rahrhino 15 May 2017
1

I usually slot one of these in my Jinteki decks because I found it very versatile and useful in several ocassions. For glacier or horizontal jintekis. By these days I use it for the following

I haven't tried to export it to other factions yet, but the Jinteki mind games are more difficult to import and with a 3 influence is harder to justify.