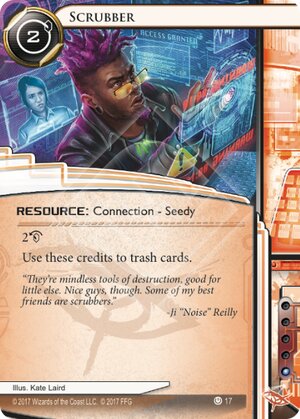 2recurring credit (When you install this card and before your turn begins, refill to 2 hosted credits.)

You can spend hosted credits to pay trash costs.

"They're mindless tools of destruction, good for little else. Nice guys, though. Some of my best friends are scrubbers." -Ji "Noise" Reilly
Illustrated by Kate Laird
Decklists with this card

For 2 and one influence, this card turns you into a poor man's Whizzard: Master Gamer. The pressure this card exherts can slow down the corp's asset placement dramatically. Jackson Howard, Adonis Campaign, and so many others become much easier to eliminate, perhaps forcing down ICE that the Corp would rather use on central servers.

Additionally, while probably overkill when used with Whizzard: Master Gamer, it can keep the trash creds flowing if you are accessing multiple cards in the HQ or R&D.

More and more, I feel this card to be a necessity in most runner decks. Trashing corp assets and upgrades is very important in a lot of games. If you trash the top card of R&D, you can run again for another chance at an agenda. If you trash enemy pad campaigns and the like, you deny the corp income. And there are more and more powerful corp cards being released that have a high trash cost (Team Sponsorship comes to mind). The problem is the cost. After building up your rig and paying your way through servers, you often don't have enough credits left to trash cards, or it leaves you broke. It sucks paying your way through a heavily protected server and then being forced to leave an Ash 2X3ZB9CY or a SanSan City Grid untrashed because of lack of funds.
Even without modifiers like The Supplier, this card pays for itself in one use. Against some decks, like Near-Earth Hub: Broadcast Center if you consistently trash their assets, its game over for them. Without income from pads and the like, their economy is shut down. Any Diversified Portfolio they are packing become dead weight. Of course some decks have little in the way of assets and upgrades. But they are almost guaranteed to have 3 Jackson Howard, so hopefully you'll get a little use out of it.

(Data and Destiny era)
quailman2101 253
It's a meta-call. If your meta is full of NEH and Team Sponsorships, go for it, and play it in Whizzard for good measure. If your meta is full of Weyland and HB glaciers however, it's next to useless. — pang4 9 Nov 2015
Not entirely. At the very least, HB glaciers usually run Adonises (and possibly Eves and BB Grids)... and Weyland these days usually packs stuff like Public Support at the very least, and a lot more depending on the flavor (Ash and Crisium come to mind as highly prevalent). — PeekaySK 9 Nov 2015
Looking at this card for an Adam deck I am working on. — Raiddinn 7 May 2016