Whenever you make a successful run, you may spend hosted credits for the remainder of that run.

When your turn ends, if there are 3 or more hosted credits, you must pay 1credit or trash this resource. 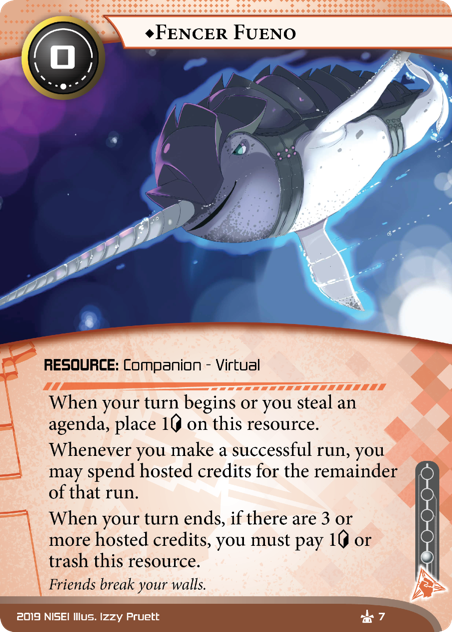 This little guy is deceptively powerful. For a cost of zero, a and a card, you get to generate 1 per turn. This is on the level of Rezeki and Data Folding except putting them to shame because of its install cost. The catch is of course that you can only spend these s during a run, after a run is successful--that's a pretty narrow window... or is it?

Look, I'm no Shaper, I hate Shaper, and I will never be a Shaper, so I'll leave it up to the Green Homeboys to figure out all of the SMC-Net-Mercur-Da-Vinci-Triple-Install-Hayley-Trigger-break-reality shenanigans. Instead, let's take a much more practical approach--just using this guy's money to trash cards.

Too simple? Well, when have you ever played a runner game where you didn't trash an asset... or an upgrade? This guy gives you the same long-term security as the best of them with almost no tempo hit. Heaven forbid you see asset spam, as this poor little narwhal will be drained faster than Weyland can drain the ocean and set up a parking garage in the empty space (and then burn it down when the runner steps in; which considering, is remarkably fast).

"What if the corp isn't running assets or upgrades?"

...if I could live in a world where the inclusion of a 0 cost 1 Inf card meant that every single corp ran nothing but ICE and Operations, I'd include it in a Heartbeat. : )

Seriously though, the point is it's not really something you need to concern yourself with.

Now, the companions share a theme of punishment if you let their s build up too much. Taka's is pretty harsh which not only gives you a tag, but gives it to you with the corp primed with 3 to react to it (unless you're one of those bastard 419/Security Nexus/Citadel decks with 7 Power Taps installed but those decks don't need Taka anyway). Point-in-case, you're probably trashing Taka rather than taking the tag. Fueno though? Fueno's a bro.

Fueno operates on the concept of "pay-it-forward," simply asking that if he's gone out and scrounged up 3 s for you, that you simply give him the next he holds, because dangit, he's tired and it's hard to go hunting while he carries so much. Mechanically speaking of course, you lose 1 at the end of your turn so that Fueno can stick around and generate another at the beginning of your next. In certain situations, you're completely fine with this--especially in asset spam. Do you need to lie low against CtM? No prob--you'll pay those 1 or 2 extra s forward so that they can be used to fight help the next CtM trace after they've flipped over another Bankers Group. HB got you down with Ash? Use those Fueno s to fight the trace (and trash Ash). Gagarin? Fueno now reads "access one server each turn ignoring Gagarin's ability. You get the picture.

And Lastly (because I have to), quick shoutout to Adam and this card. Adam generally runs NaT so he he has to trash everything he runs into. Against taggers, this can be pretty rough since he wants to run hard early (potentially turning on HHN). Fueno gives just a little bit of extra cushion--no up-front tempo loss with a few 's insurance for those awkward 5-Trash Mumbads or Jeeves that you hit in HQ. Of course, if you had less than 5 credits, then Fueno might actually force you to trash them anyway but shutup, you're playing Adam so you already know nothing can be perfect. (Except of course that Adam is perfect!)

Back to reality, would I recommend a copy of this in Anarch, Adam, or any other non-Anarch deck where you have a stray Inf? Sure I would. That being said, I also wouldn't ever recommend more than 1 copy. It's unique, so you're not stacking the effect, making future Fuenos a dead draw, and in a sense, a loss of a click (because you had to draw it). Likewise, it's ability is good... but I mean, it's not that good. Drip econ is at it's best in bulk. One or two credits a turn is great, don't get me wrong, but 6 is insane, and Fueno on his own can't get you there. But really, if you grab an early Fueno in your opening hand and drop him down turn 1... are you really not going to use that money at some point?

(Downfall era)
Chezni 48
Great write-up. This review made me realize Fueno is better than I thought; if you don't use the credits, you aren't losing credits, you just aren't gaining them anymore. Much better than my previous thought that he was capped with three credits at most being placed on him. — dnddmdb 3 Sep 2019

Great review, a clarification though, there is no paid ability window after a successful run so in most cases you will be unable to use SMC/DaVinci or other cards to spend the Fencer Fueno credits. Apart from trashing cards, the credits will pay for Ash, Amani Senai, Red Herrings, NAPD Cordon, Future Perfect, Fetal AI, Bellona, Warroid Tracker, Ganked! and traps like Sapper, Archangel, and Chrysalis.