Spend hosted credits to use programs during runs.

When your turn ends, if there are 3 or more hosted credits, you must take 1 tag or trash this resource. 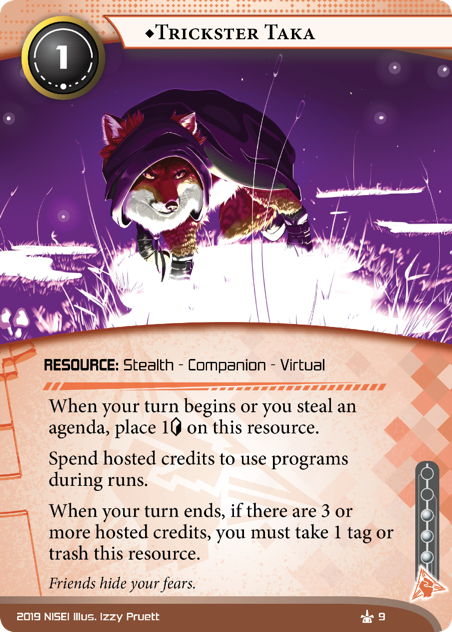 First off, lovely art, love me some foxes, so A+ there.

"Infinite" drip cards are strong. More so if they come with few conditions like Data Folding and Rezeki, but Trickster taka is still a strong card. Nearly every runner ( side-eyes breakerless Leela ) wants to break ice, and for that you need to pay for your ice breakers. This helps with that, similar to Cyberfeeder. Every turn this fox spawns a credit into a neat little pool. Unlike Cyberfeeder, which is 1 recurring credit, this means you don't have to run every turn to get full value out of it. But in a stroke of design brilliance on Nisei's part, you can't just lean back and twiddle your thumbs forever while this keeps ticking. After 3 turns you have to run (since it doesn't work outside of one) and use some of these credits, or you will either take a tag or have to say goodbye to the fox. You can use Taka for all programs tho, not just ice breakers, so it works with SMC, Surfer, etc.

The most exciting part for me however, is Taka's subtype: Stealth. Many stealth cards have long since rotated and it is very exciting to get a new one. Unfortunately the archetype never took off in anarch, as they have to import too many cards to make it work and I don't think this will change that. Same goes for criminals, although I think Switchblade is probably a lot better than BlacKat.

But I think this card will truly shine in Smoke. While Net Mercur is still the star of the show, having an secondary (infinite) source of stealth credits is really good. Especially since Smoke likes to run often and is usually not shy for influence. Taka allows you to go to the aforementioned Switchblade over Dagger, which absolutely hoses ice like Surveyor, Trebuchet and Tour Guide, and in testing i found you are able to use Net Mercur credits more freely if you have your stealth needs covered.

So in short, will definitely see play as a breaker drip card and probably also as a 1 off in Smoke.