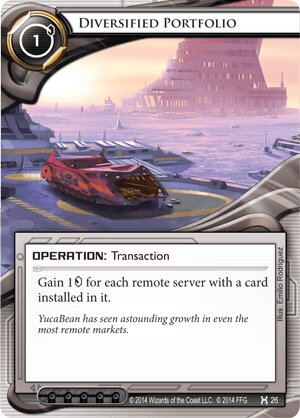 Gain 1credit for each remote server with a card in its root.

YucaBean has seen astounding growth in even the most remote markets.
Illustrated by Emilio Rodriguez
Decklists with this card

Diversified Portfolio is definitely not for every deck, mostly because of its 1 cost. Let's compare it to what I feel are its closes neighbors, Beanstalk Royalties and Sweeps Week.

So, what does this all boil down to? Basically, if you're playing Weyland, always take up to 3 Beanstalks before even considering DP. NBN will usually want Sweeps Week over this, especially for its fear factor (including the ability to annoy Public Sympathy runners), and early-game utility. Even in HB, if I can spare any influence, I'd take BR over DP in a heartbeat. So, all that leaves is Jinteki...

Oh, Jinteki! Finally, a faction that can really make use of DP. This definitely isn't for every Jinteki deck, but there is one place this can clean house, and that is shell game white tree. With 5+ remotes not uncommon in those circumstances, this becomes a powerhouse. If you're ballsy enough to leave agendas on the board (even fully advanced), this can become a quick trip to credit heaven late game, and flush out your credit pool when you're still busy piling credits on Shell Corporation, letting you delay grabbing credits off of it for a few turns, which makes it even more efficient! And, finally, it gives runners an incentive to trash exposed traps in remotes, letting you shuffle them back into R&D with Jackson Howard.

That said, this will never shine in the early game, so frequently you'll only drop a single copy in a deck. But, I feel like DP is to shell game RP what Mark Yale is to Titan Transnational—an almost mandatory inclusion, yet used sparsely.

(The Universe of Tomorrow era)
Pikeman 279
IG would be another contender, as it is generally even more horizontal than RP... and those remotes tend to stick around even longer. That being said, the few games I've played my IG deck, I haven't really had a need for credits (turtlebacks + sundew + PAD Campaign gives plenty), so I'm not sure I would take this in addition to any of those. Swapping it out for something might make sense in some builds, but I generally think asset economy > operation economy in IG in almost all cases. — Sabin76 22 Sep 2015
1