"I'm just thankful that the brain damage is reversible. With the support of the city of New Angeles, I hope to be on my feet and back to practicing my art very soon." -Kate "Mac" McCaffrey
Neutral • Mauricio Herrera • Cyber Exodus 50
All sets:
Links: Decklists | ANCUR 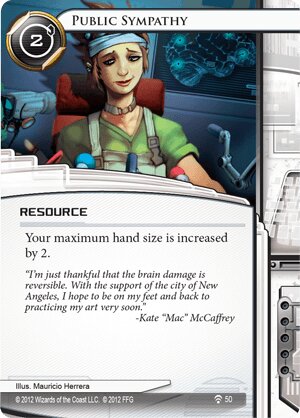 Just like the corp's Research Station, Public Sympathy falls into an awkward place. It doesn't counter anything directly, except maybe the prolonged effects of brain damage, so it's hard to justify including it in your deck. But, I've found it definitely has value, it just needs to be understood to make it work.

The most obvious faction to take advantage of PS is definitely Anarch. Cards like Amped Up, Stim Dealer, and Stimhack look a whole lot more appealing with a larger hand size. And unlike Brain Cage, you can have multiple copies installed simultaneously—and more importantly, multiple copies in your deck without worrying—and you don't have to suffer a brain damage to get there (which remains if you ever lose Brain Cage).

But PS is useful even if you don't plan on giving yourself a full frontal lobotomy. While staples like Plascrete Carapace invariably find themselves in every runner deck worth its salt, it has an Achilles' heel—if the corp has little or no meat damage, it's nothing more than a wasted draw and wasted credits when installed.

PS, on the other hand, has utility even if the corp doesn't do a single damage to you over the course of the entire game. A lot of cards in a runner's hand is scary to the corp. "What is he holding on to in there, I wonder? If I rez Curtain Wall, is he just going to kill it the next run with Knifed?"

Beyond the simple psychological factor, this lets you hold on to those cards you don't need right away, without feeling like they're dragging you down early-on as much as brain damage would. You can also build up a big hand on one turn, and dump 3+ the next for a massive hit, without worrying about falling into Scorched's kill radius, even if you don't have a Plascrete Carapace. Forget Net Shield, your hand size is your safety net. And this works against all types of damage, too! Or why not draw three cards (or five) without worrying about what you'll have to throw away?

The pros are almost too numerous to mention, so I'll just end with this—try it out, I think you'll be pleasantly surprised. I even find myself taking 2 or 3 of these along and dropping PC entirely.

(The Universe of Tomorrow era)
Pikeman 266
It's also a great influence free way to support Faust and the Pancakes Wyldside combo. — Bigguyforyou518 5 Sep 2015
You should however consider that PS is unbelievably slow. While potentially saving you from 2 x Scorch you have to draw those cards. Plascrete saves you right when you in stall it; for PS you need to invest two cards and clicks for at least 4 additional cards to do the same. Even then it might be okay to play scorch then since you destroy 8 out of 45 cards and the runner has to draw up eventually. — Capstone 9 Sep 2015
Also worth noting that if the corp can keep you tagged they can trash PS - whereas Plascrete is around to stay — botdamon 7 Sep 2016